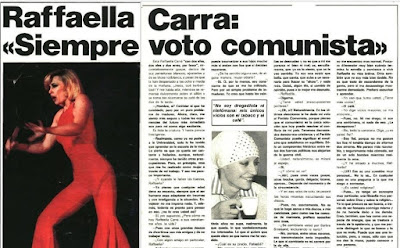 Raffaella Maria Roberta Pelloni, as her full name was, will be remembered as an energetic, overwhelming and ingenious personality who became one of Italy's most beloved artists in the second half of the 20th century.

But, Raffaella Carrà wasn't just another artist of pop culture; she was a progressive woman, an outspoken supporter of the working class and a defender of women's rights. In an interview to Spanish magazine Interviú in 1977 she proclaimed: "I always vote communist" (Siempre voto comunista), adding that "being a communist implies a way of life and a very great responsibility".

Decades later, in another statement she said: "In a conflict between workers and employers, I will always be on the workers’ side".

In the mid-1980s, when Chile was under the brutal dictatorship of Augusto Pinochet, Raffaella Carrà managed to express her solidarity with the struggle of the Chilean people. She invited the Chilean music band "Inti-Illimani", whose members were in exile in Italy, to sing in her popular RAI show.

"#RaffaellaCarrà is dead. A monument of our history of the show. I want to remember her in the image of Bianca, a character from Monicelli's masterpiece 'The Companions'. The earth is light to You", commented Marco Rizzo, the General Secretary of the Communist Party, Italy, in his social media accounts.