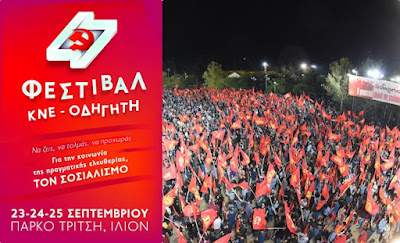 Under the slogan "Live, dare, move on - for the society of true freedom, Socialism", the 47th festival of the Communist Youth of Greece, known as KNE-Odigitis Festival, began its journey with numerous events throughout the country.

The festival, which is travelling in many Greek cities and towns throughout July and August, includes political as well as cultural events.

In the country's second largest city and a major port, Thessaloniki, the festivities will take place on September 16-18 at the open space of Karatasios multidisciplinacy park. Kyrillos Papastavrou, member of the KKE Political Bureau, will deliver a speech on the last day.

The 47th KNE-Odigitis festival will conclude its journey with a three-day events on 23, 24 and 25 September at Athens' Tritsis Park. The General Secretary of the CC of the KKE Dimitris Koutsoumbas and the Secretary of KNE Nikos Abatielos will be the speakers at the major political event on Saturday 25 September.