An extended meeting of the Political Committee of the Communist Party of Britain on 16 December called for a redoubled effort to assert the principles of socialism and working class internationalism, and to strengthen levels of working class mobilisation, in face of the Conservative victory in the general election.


Addressing the meeting General Secretary Robert Griffiths identified the prime cause of the defeat of the Labour Party as its failure to uphold its original commitment to respect the democratic result of the 2016 referendum that Britain leave the EU. Of the 54 seats lost by the Labour Party 52 were in constituencies that voted Leave in 2016: the bigger the Leave vote in 2016 the higher the rate of abstention and the swing against Labour in 2019.
The clear cause was the Labour leadership’s change of position on the EU. Under pressure from its right-wing, it had shifted to proposing to negotiate a new exit Deal with the EU and then to put both this Deal and the option of Remain to a new referendum. This was seen as a violation of democracy by traditional Labour voters in areas, especially in the English regions, where EU free market regulations have led to an unprecedented level regional poverty, deindustrialisation and dereliction, almost unparalleled even within the EU.
In the 2017 General Election the Labour Party had committed itself to respect the referendum result and had also proposed sweeping moves to take into public ownership public utilities, to end austerity and repeal anti-trade union laws. It had gained 12 million votes, 40 per cent of the total, the highest vote secured by the Labour Party for the past half century.
In 2019 the Labour vote was reduced to 10m and 32 per cent of the total vote. By contrast the Conservatives secured 43 per cent of the vote under the slogan ‘Get Brexit Done’.
It is clear, however, that the EU Deal to which the Conservatives are committed will not free Britain from the EU’s neo-liberal prohibitions on democratic control of the economy as embodied in the competition terms of the Single Market. It will not therefore be a ‘people’s Brexit’. It will still deny what the majority of British voters wanted – a Brexit that would allow a British government to support strategic industries, take transport and energy fully into public ownership, reform public procurement rules, slash VAT, regulate the labour market and raise funds for massive investment in housing and economic infrastructure.
The Political Committee also stressed that it was important that the scale of Labour’s defeat should be exaggerated. Despite the loss of seats, the party’s share of the popular vote under Jeremy Corbyn in 2019 had still exceeded that under right-wing and centrist leaders such as Neil Kinnock in 1987, Gordon Brown in 2010 and Ed Miliband in 2015. More than 10 million people had voted for the most radical Labour manifesto in more than three decades – despite a media campaign against Labour of unprecedented ferocity.
This was why it was necessary to underline that the loss of the election was due to the retreat over Leave and the EU. It was not a result of the party’s Left programme which won the enthusiasm of many young voters, especially those marginalised in the labour market and would, if implemented, have significantly shifted the legal balance between capital and labour in favour of workers.
Britain’s ruling class still saw it as a key and necessary objective for its own political stability to end what the Financial Times editorial on 14 December described as the ‘Marxist grip’ on the Labour Party and to convert Labour into a continental style social democratic party.
This was why it was now vital for Communists in Britain to step up the level of working class mobilisation, through local trades union councils, through trade union action on wages and conditions, through neighbourhood struggles on pensions, benefits and housing – and, no less important, ideologically on the need for socialism and more immediately for greater powers for working people to exercise democratic and popular control over the economic life.
The British ruling class want a continued relationship with the EU that will enable them to maintain the City of London as the prime international centre for financial transactions inside and outside the EU, to expand its financial relationship with the US and the Middle East and, at the same time, maintain a politically stable base in Britain itself. It has, at least temporarily, resolved the crisis in the Conservative Party and the previous collapse of its political support. It is now attempting to manage a precarious international co-existence between increasingly antagonistic economic blocs on a gravely weakened industrial base.
The Political Committee called on Communists to ensure that the British ruling class does not succeed in these objectives, that its attempt to consolidate a populist base in the working class is defeated by a new wave of working class mobilisation and that the trade union and labour movement puts an end to Right-Wing attempts to turn the Labour Party into a social democratic party. In doing so Communists must also expose the anti-working class and neo-liberal character of the EU and, in this, draw strength from the resistance to EU neo-liberalism by other Communist Parties internationally.

* * *
New Communist Party of Britain
continue to live the lives of Roman emperors on the backs of the millions upon mil-lions of working people they exploit at home and abroad.They’re going to have a good Christmas drinking them-selves silly dreaming of making Britain the ‘Singapore of Europe’ – a spivs’ paradise for the money-launderers, drug-lords and oligarchs who have already turned London into a millionaires’ playground 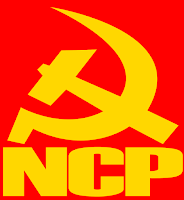 They’re going to have a good Christmas drinking them-selves silly dreaming of making Britain the ‘Singapore of Europe’ – a spivs’ paradise for the money-launderers, drug-lords and oligarchs who have already turned London into a millionaires’ playground

Labour  didn’t  lose  because  its  manifesto  was  too  left-wing. It lost because millions of working people who voted for  Brexit  in  2016  were  not  prepared  to  support  Labour’s  new Remainer stance that the Blairites had been calling for in the first place.

”Within the labour movement the blame game has already begun. The right wing say it’s all Jeremy Corbyn’s fault in a call to return to Blairite policies that have brought poverty and destitution to Greece and France and many other parts of  the  European  Union  that  we  will  now  leave  within  the  next few months. Or will we?

Boris Johnson’s withdrawal  plan is clearly a form of Brexit but nobody knows what the outcome of the follow-up negotiations with the EU will be. If it is anything like what Mrs May’s deal envisaged then Britain will still remain tied to Brussels  institutions for many years to come. It is equally clear that Johnson wants  to replace the Treaty of Rome with a new ‘Treaty of Washington’ that would allow the  big American pharmaceutical  corporations to plunder  the health service in return for cheap food imports that we could get from America anytime on ‘No deal’ World Trade Organisation (WTO) terms.

Even though the election was a disaster for Labour, we must remember that most class battles are won in the field of struggle and not in parliamentary  debate. The struggle outside parliament, which is a bourgeois institution,  will be far more decisive than the struggle inside the House of Commons.

The Blairites are bleating that Corbyn lost the election. But they’re  the ones  who sabotaged  Labour’s  campaign  and  it’s  their failed Remainer policy  that sank Labour’s  hopes in its traditional northern strongholds. It’s Labour’s fifth column, which also includes the pseudo-left who told us  to  “Remain and Reform” and that “Another Europe is  Possible”, that  ultimately destroyed Labour’s chances in the general election.

The  New  Communist  Party  has  never  confused  the  Labour Party with a revolutionary party, nor imagined that we  can  overthrow  the  bourgeoisie  through  parliamentary  elections. But we believe that a Labour government, with its organisational links with the trade unions and the co-opera-tive movement, offers the best option for the working class in the era of bourgeois parliamentary democracy.

Our  strategy  is  for  working-class  unity,  and  our  cam-paigns are focused on defeating the right-wing and strength-ening the left within the labour movement. Our party came into being out of the struggle against revisionism, to serve the interests of the working class. We shall not be diverted from that. We know that social democracy, of whatever trend, can never lead to socialism. But the struggles of the future can only come from a labour movement confident to lead the struggle for revolutionary change.