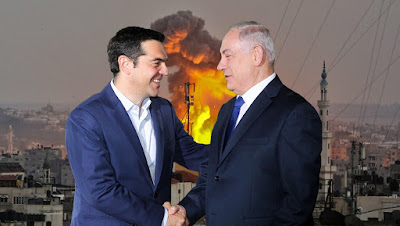 The dangerous developments in Palestine are the result of the plans being prepared by the USA-NATO-EU slaughterhouses and the governments that support the Israeli government and its murderous work, even by equating the murderer with the victim or claiming they keep equal distances.

The cold-blooded murder of the Palestinian people reveals the pre-election narratives of the SYRIZA government about supposedly «progressive, anti-right» fronts. The new murderous attacks are made by order of the far-right Prime Minister Netanyahu, a friend and «honored partner» of Tsipras, and the support of the «diabolically good» Trump. While the Israeli bombers attacking Gaza are being trained in Greece!

The «stability» of the Eastern Mediterranean, the «businesses» advertised by the SYRIZA government, are watered with the blood of the children of Palestine.

We call on all Workers’ Federations, Regional Unions and Trade Unions to condemn the murder of the Palestinian people and express their Solidarity by demanding

Immediate implementation of the decision of the Greek Parliament in 2015 to recognize the Palestinian State.

Stop the joint military exercises as well as the political, economic and military cooperation of Greece with Israel, which continues and deepens by the SYRIZA government.