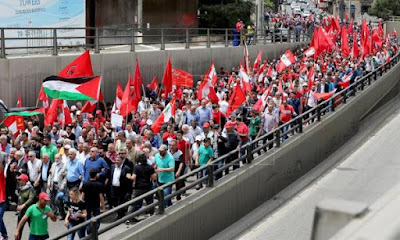 The demonstration was organized by the Lebanese Communist Party and consists the beginning of a series of actions against the ruling class and the pillaging of the country.


"This is only the beginning of a series of measures that will be taken until the political authority assumes its full responsibilities for the economic deterioration," Hanna Gharib, the General Secretary of the Lebanese Communist Party, was quoted by Elnashra, an online independent newspaper.

"We call upon all citizens to forget their political affiliations, take to the streets and demand for their rights of a government free from corruption," Gharib said while heading the protest along with the General Labor Union.

Wearing red scarves and raising communist and lebanese flags, protesters complained about corruption, poor public services and spiraling public debt that is more than 150 percent of GDP. A banner was sending a clear message: "Off to the streets: enough talk."

According to the Communist Party head Hanna Gharib the protests would escalate.