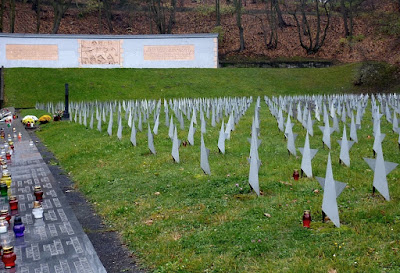 In an outrageous act of vandalism, unknown fascists damaged 23 metal stars on mass graves at the Gdansk cemetery where about 3,000 Soviet soldiers, civilians and prisoners of war are buried.

According to TASS, the Russian Ministry of Foreign Affairs of the Russian Federation condemned the attack and called for an investigation without delay, urging Polish authorities to bring those responsible to justice.

"The Gdansk incident- said the Russian MFA's statement- is yet another link in a series of thuggish attacks against our monuments at Polish cemeteries that we have been witnessing in recent years. We believe incidents of this kind result from Warsaw’s destructive policy to cleanse the country from any reminders of its liberation by the Red Army at the end of the Second World War and rewrite the history of what followed, while claiming to promote “decommunisation”.

The statement of the Ministry also reminds that it was the heroic effort of the soldiers and personnel of the Red Army which, at the cost of many lives, paved the way for the liberation of the city of Gdansk in the spring of 1945.

Furthermore, Moscow calls Poland to honour its international commitments and reminds its moral duty towards the fallen heroes and victims of the war.