And all of us are spiralling along with her.

3. For that reason every human being who is wandering in the present stench of the decay emerging from the decomposition of the bourgeois world, considers his soul and his salvation to be interconnected with Soviet Russia.

That is why everything we learn that is taking place there, every russian success, a scientific invention, a good harvest, a military victory, are of great interests to us and we are happy because, consciously or unconsciously, we know well that this is how the construction of the future world moves forward and global hope is rising.

4. Many are surprised and hear with distrust the rising course of Russia. How do these miracles happen? What is the secret of Russia? they ask. They ask because they are non-believers, because they never lived her and do not not what a miraculous giant power faith is.

When faith dominates a man or a people, life, which had begun to fall asleep, shakes, regains her omnipotence and from this moment on, the miracle is now the daily submission of the Need to the lustful impatient desire of the soul.

The non-believer is hungry when he hasn't eat well, the unfaithful feels cold when he doen't wear thick woolen clothes in the winter, the non-believer leaves frightened when he suddenly faces in front of him deployed the most powerful enemy, the believer isn't hungry, isn't cold, isn't afraid, he is sure.

Someone, inside himself, call him whatever you want, defeats with the small logical certainties and reaches the peak of yesterday's chimera which is now called today's reality.

This is the secret of Soviet Russia.

5. The rhythm of Russia is impetuous, unstoppable, miraculous. Stakhanov is nothing but the personification, in a single sector only, of the impatience that conquered the spirit of rebuilding. This Spirit- let's call it historical Need- feels that today's world is shattered and the man cannot, must not be left homeless. A wider morality, a fairer distribution of material and spiritual goods, a superior Hope, urgently need to be created, so they can fit the soul of the man who grew up. 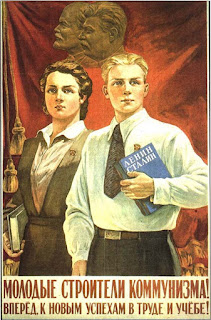 That is why, with so much haste and intensity, all the responsible guides of Russia are struggling to illuminate the masses. Because they know that salvation depends only on the illumination of the people. In every factory, barrack, hospital, prison, ship, school, there is, sacred lime core, a club, an educational izba, a Red Corner- with a library, newspapers magazines, usually with a cinema, orchestra, an improvised theatrical scene.

There, during the hours of rest, the comrades gather, read, or one reads and explains or they deliver speeches, concerts, or perform theatrical plays, usually written by the workers themselves and the peasants. Or they teach the illiterates.

Political, social, spiritual schools, where every citizen man or woman, is educated and learns his rights and obligations.

Even the blind ones feel the light, it is an overpowering explosive force. And when it explodes the house illuminates, whether you want it or not, and the neighbor's house.

For that reason if they will ask me what was the deepest impression of the Soviet Russia and what gave me the greatest hopes, I will ruthlessly answer: the sacred fury of the leaders to illuminate the mass. The light! The light! That is the biggest weapon of Soviet Russia.

Pastor Carl Fogle was right when, after coming back from his soviet journey, summed up his conclusions with these simple moving words: What I saw and lived in Soviet Russia made me regain my trust in the people, which I had lost.

* Born in Crete on 18 February 1883, Kazantzakis is widely considered a giant of 20th century's literature and one of the best known Greek writers/novelists. His novels include Zorba the Greek (1946), Christ Recrucified (1948), The Last Temptation of Christ (1955), Report to Greco (1960) and others. From 1925 to 1930, Kazantzakis visited the Soviet Union three times, spending almost two years in the socialist country. His memoirs from his stay in the USSR are included in the publication "Travelling: Russia, a Chronicle of Three Journeys". He died in 1957.
Translation into english:
IN DEFENSE OF COMMUNISM ©