PCPE: The right of self-determination is unviable within the Spanish capitalist framework

Source: International Communist Press.
The Communist Party of the Peoples of Spain (PCPE) issued a statement on the last events in Catalonia.
The statment of the Political Secretariat of the PCPE discussed the last events in Catalonia and decisions of the Council of Ministers. It  reminded that since the beginning of these events the Party had been "warning for months about the invalidity of the independentist process in Catalonia". The Party underlined the reasons "why the exercise of the right of self-determination is unviable within the Spanish capitalist framework".
The statement said "Capitalism has nothing to do with democracy, but with the monopoly of violence, which is today exclusively in the hands of the Spanish Government. The statement made yesterday (October 10, 2017) by the President of the Generalitat proves that the direction of the independentist process does not count, nor can count, on the strength to impose indenpendence. Large sectors of the Catalan people have been lead to a dead-end road which will generate a huge feeling of frustration."
It was observed that the contribution of some sectors of the Catalan nationalist left was "remarkable". The Party assessed that this is due to the wrong strategy to struggle under the flag of those who "brutally repressed the workers' struggle and approved ruthless capitalist policies together with the Socialist Party and the Popular Party in the past." It stated that the independentist process which has suffered a harsh political defeat is represented by the Catalan bourgeoisie as part of the "Spanish dominant class clear since October 1". 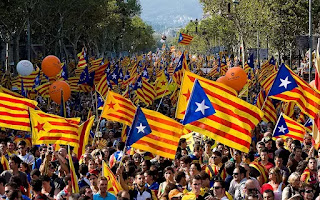 The PCPE criticized the supporters of the independence movement of not understanding "the class structure in current Spain" and warned that "the division among workers has alarmingly grown, the reaction has increased and fascist hate demonstrations have multiplied". The statement underlined that "The Spanish bourgeoisie has been given the perfect excuse to keep going on the reorganisation of the State, currently in process, under a deeply reactionary sense." The Spanish State is forcing the Government of Catalonia to submit, rejecting any mediation or negotiation which means that bourgeois politics on both sides "dwells on the popular feelings and the lives of millions of workers."
The Communist Party called all workers and the popular strata, especially women workers and the youth "to defend their common interests beyond any nationalist division". The call included to stop the advance of reaction and fascism, to stop the repression on the Catalan people, to defend the popular and workers unity beyond any national difference and to join together under the common goal of defeating the Spanish Capitalism, "in order to open the path to the proclamation of the Socialist Republic".
The call added that in the Socialist Republic of Spain the power would be in the hands of the working class, finding its "territorial basis in the union of free peoples, democraticly exerting their right to self-determination." The statement concluded with the slogan, "For the independence and unity of the popular and working class!"