KKE comments on Tsipras' visit to the US: The SYRIZA-ANEL government confirms its loyalty to NATO-USA 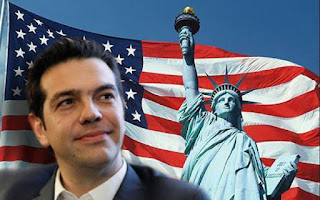 Regarding the five-days long visit of Prime Minister Alexis Tsipras to the United States, where he will have a meeting with President Donald Trump, the Press Office of the CC of the Communist Party of Greece made the following comment:

"The trip of the Prime Minister to the USA- regardless of any communication tricks by the government- has one basic aim: The upgrade of the US-NATO bases in Greece and the deeper involvement of the country in the murderous plans of USA-EU-NATO in the broader region.


Whatever "quid pro quo" the SYRIZA-ANEL government asserts in this abject and dangerous bazaar, do not concern the Greek people but the investments and the profits of business giants, also through the sale of public property and energy wealth.

The SYRIZA-ANEL government can well be one of the most "law abiding"- towards NATO and the USA- governments.