Catalonia independence: PCPE reflects on the intra-bourgeois struggle for dominance in Spain

In a brief video message issued on Saturday afternoon, Catalan leader Carles Puigdemont vowed to continue working to build “a free country”. “We must do so resisting repression and threats, without ever abandoning, at any time, civic and peaceful conduct,” he said, adding that his government did not have or want “the argument of force”.

Madrid reacted to the Catalan parliament’s unilateral declaration of independence on Friday by firing the regional government and dismissing the head of the local police force.

In sight of these rapid developments, we publish a recent press release (23/10/2017) issued by the Communist Party of the Peoples of Spain (PCPE) which reflects on the ongoing intra-bourgeois struggle in Spain and calls the working class to reject the repression by the Spanish state towards Catalonian workers and intensify the struggle for a homeland of labour based on fraternity.


The statement of the PCPE is as follows:
Yesterday the Council of Ministers adopted the Agreement which sets out the measures to be approved by the Senate on 27 October, in the implementation of Article 155 of the Spanish Constitution in Catalonia.
Our Party, which is closely following the development of events, has clearly expressed in its communiqués of 2 October and 11 October the Communist position in the face of the serious succession of events that we face.
We have warned the working class and the popular sectors of all Spain, and especially of Catalonia, that there is no possibility of democratically exercising the right to self-determination in the framework of Spanish capitalism. We have explained the reasons why, from our point of view, the process of independence in Catalonia has entered a deadlock. We have positioned ourselves with absolute force against all repression against the Catalan people and we have called to fight against the advance of the reaction. We have called on the working class to defend its organizational, political and ideological independence against all nationalism, not to fight under false flags.
The Government of the Generalitat and the Government of Spain have long been feeding in a suicidal spiral, in which the measures adopted by one legitimize the other, and the same happens the other way round. In that crazy career, we, the workers have nothing to gain, but much to lose. Reactionary identity and exclusionary feelings are advancing which are characteristic of all nationalisms, and the massive use of state repression against large sectors is legitimized.
The Spanish bourgeoisie, of which the Catalan bourgeoisie is a part, is moving towards a large-scale reform of the Spanish political system and using the pro-independence process as a pretext for an even more rapid and reactionary advance. The agreement of the Council of Ministers yesterday, which the Communist Party flatly rejects, is one more piece of that gear.
The strength of the Spanish state, constantly undervalued by Catalan nationalism, is expressed in an intensive application of Article 155 of the Spanish Constitution. The organs or authorities created or appointed by the Government of the Nation  (Spanish Government) will assume all the powers of the Government and the parliament of the Generalitat (Catalan institutions). In the Agreement of the Council of Ministers, a clear threat to the workers of the Catalan Administration is included. In case they do not comply with the instructions of the state authorities, not only the disciplinary power will be exercised against them, but will be reported to the Public Prosecutor for the clearance of the corresponding criminal responsibilities. 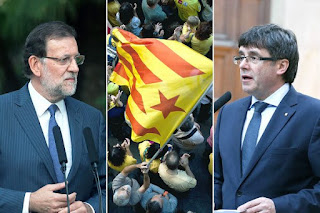 In these difficult times it is necessary that the workers' and people's forces reflect on the underlying causes behind all these events. The bourgeois forces have decided to reform the state to adapt its functions to what has long been happening in the economic base: the complete unification of the Spanish capitalist market.
In economic terms, the "coffee for all" era is over, an era that allowed the contradictions between fractions of the bourgeoisie to be largely resolved on the basis of the sharing of market shares through an asymmetric transfer of powers to the autonomies, allowing certain peculiarities in economic, fiscal or labour policy aimed at stimulating business profits in one or another autonomous community, and always depending on its strength, that is, its capital, even at the cost of producing serious territorial imbalances.
The Catalan bourgeoisie has ceased to express itself as a national class, as evidenced by the intense process of transferring the social headquarters of its main companies, the positioning of Catalan employers and the fact that its traditional political representative (Convergencia i Unió ) has imploded.
They are the lower sectors of the bourgeoisie, owners of so-called SMEs (small and medium enterprises), who, spurred by the intensification of capitalist competition motivated by the crisis, and accompanied by a small bourgeoisie at risk of severe proletarization, have driven and lead the independence process; manipulating the national sentiments of workers and popular sectors condemned to misery by capitalism and leading them to a dead end.
The Government of the Generalitat has only two options left. Or summon the Catalan Parliament, so that next Wednesday, October 25, the independence and the Catalan Republic will be declared, calling constituent elections in application of Law 20/2017, of legal and foundational transitoriness of the Republic, annulled by the Constitutional Court; or to call regional elections. In the first case, the Catalan government would be taking the social sectors that support the independence process to undergo state repression, a state who has in its hands the monopoly of violence. In the second case, the pro-independence block would be split without referral.
The working class and the people should not be confused by this "flag war". We must choose, yes, but not between a Catalan capitalism or a Spanish capitalism, which will exploit and oppress us in the same way. The working majorities must choose between continuing to live under a capitalist political system that exploits and oppresses us to the point of stealing our lives, or between following an independent path in which political power is in our hands, in the hands of the working class and the people.
We want a country for the working class, in which those who produce all take the reins of power, to ensure the satisfaction of social needs, so that our peoples have the freedom to democratically decide their future on the basis of maximum respect and integration of the cultural and linguistic expressions of the working people. And to do this, we must throw every foreign flag away, because the homeland of labour has nothing to do with the homeland of capital.
The bourgeoisie will try to ensure that the reorganization of the political system is carried out through a reactionary constitutional reform that will bring nothing good for the social majorities. We should not let ourselves be caught up in their game.
We must fight to prevent the progress of this process, which takes its first steps with the application in Catalonia of Article 155 of the Constitution, intensifying the class struggle. In face of the measures of the State:
- We must stop any type of repression against the workers in Catalonia, especially against the Catalan public employees and against the teaching workers who are directly threatened.
- We must stop any kind of repression against the culture and language of the Catalan working people, which the Spanish Government has set in its sights and which it is prepared to undertake through the intervention of Department of Education of the Generalitat.
- Let us defend the fraternity and unity of the workers of all the peoples of Spain and promote the struggle against the common enemy.
- We must stop the progress of the reaction. Facing the reactionary reform of the political system, we must intensify the struggle for a country for the working class.
The homeland of labour has nothing to do with the homeland of capital!
For a country for the working class!