It's not just Trump; It's Imperialism, stupid! 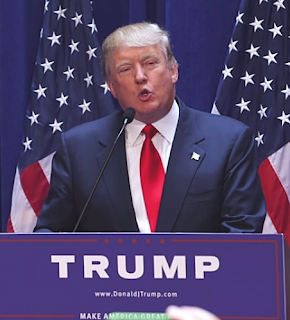 Special to the In Defense of Communism.

The enemies of Donald Trump have used numerous words in order to describe the multi-millionaire republican presidential candidate: "Bully", "arrogant", "racist", "misogynist", "intolerant", "narcissist" etc. Maybe Trump is, indeed, all the above. But the major issue isn't Trump's character or the way he presents himself in the media. The primary issue- the one that the working class in the US should be aware of- is the following: How the 'Trump phenomenon' was born and what feeds it?

On that point it would be useful to clarify that the so-called 'Donald Trump phenomenon', independently of the result in November's presidential election, is not an unprecedented or incomprehensible phenomenon in the world's major imperialist power. The rise of Trump reflects the interests of a significant part of US capital which, especially in times of inter-imperialist contradictions, choose to promote specific personalities for the political leadership.


We 've seen this in the past. US politicians, lobbyists or prominent personalities rise into nationwide fame and consequently become tenants of the White House. That happens with the significant support of the- each time strongest- US monopolies and companies. For example, in the beginning of the so-called "Star Wars" (SDI) policy the 'appropriate' president - posed as an example of american 'patriotism'- was Hollywood actor Ronald Reagan. When the interest of America's capitalist establishment moved towards the Middle East, by the end of 1980s, an experienced politician and former vice-president, George Bush Sr. became the choice. After all, the same happened in 2008 with Barack Obama. Senator Obama, under the slogans of "Change" and "Yes, we can", posed as the moderate reformist African-American who would stop the Bush administration's wars and express the underprivileged minorities (african-americans, hispanic and latino americans, poorer citizens, etc).

However, under Obama's Presidency the US Imperialism tried to 'wash out' the crimes of the previous years. President Obama himself was rewarded with the Nobel Peace Prize only for his good intentions! But who can forget the Obama administration's role in Yemen, in Egypt, in Libya and recently in Syria? President Barack Obama -a charismatic personality in terms of media communication- worked as the 'smiling face' of US Imperialism. Under different circumstances and possibly with a different tactic, the Obama government served the interests of the US capitalist establishment.

Donald Trump poses as the 'aggresive face' of the superpower. He expresses dangerous ideas and, without doubt, he is an enemy of the american working class. But the plain truth is that Trump is actually a political servant of US monopoly capital- like Hillary Clinton is. The ugly, aggresive strategy of US Imperialism does not depend on who is the tenant of the White House. After all, Imperialism always needed political puppets in order to do it's job.

The working class of the United States lacks of a powerful revolutionary leadership. Bernie Sanders, a moderate social democrat who is compromised with the Capitalist system, is not an option. Americans do not need a new 'white Obama'. America's working class needs a revolutionary force which will create the political circumstances for a real change in the balance of power. It may take too long to happen, but that's the only perspective for a positive future for the masses in the United States.