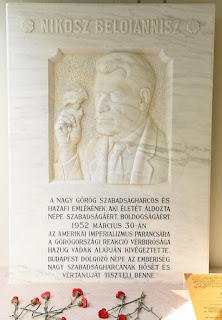 ATHENS- In a political event organised by it's Central Committee the Communist Party of Greece honoured Nikos Beloyannis and other members of the CC who were executed, murdered or fell in the battles. During the event, which took place at the KKE's headquarters in Perisos, a memorial sculpture, made by Memos Makris and dedicated to Beloyannis, was unveiled.

Upon the sculpture, which was based for years in Budapest, the following words have been engraved in hungarian language: "In memory of the great Greek fighter and patriot who gave his life for the freedom and happiness of his people. On March 30, 1952, under the orders of american imperialism the military tribunal of Greece's reactionary regime, on the base of fabricated accusations, executed him. In his face the working people of Budapest honours the hero and martyr, the great fighter of the whole humanity".

The event was attended by the General Secretary of KKE Dimitris Koutsoumbas, while the major speaker was the member of the party's Political Bureau Dimitris Gontikas. (Information from 902.gr)