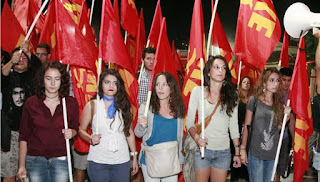 Announcement of KNE on the refugees' issue.
Source: int.kne.gr

In recent months we witness the drama of thousands of refugees and migrants, who, expelled from their lands, are seeking a better life.
EU-NATO and governments that support them over time:
- Uproot peoples from their homelands by war
- Now with their decisions, they entrap them in our country although they want to go to other countries
War, repression, profits for the few:
These were always the values ​​of the EU!

• No involvement of Greece, nor any disposal of the armed forces in imperialist wars and interventions. Close now all NATO bases.
We fight for a society without crises, wars, refugees!

Today exploiters in order to secure thei profits, along with governments and their associations, crush our rights to education, work, life, they condemn us to unemployment, job wandering for their profits.
Tomorrow again for their interests they will want to make us meat for the cannons in their wars.
Young people of labor - class families raise our own flag, the flag of the struggle for our modern rights. The flag of struggle to overthrow the monopolies’ power, in favour of the working - popular power. For people to become the masters of their own land. For solidarity and joint struggle of the peoples.
For the socialist future without crises, wars, refugees!