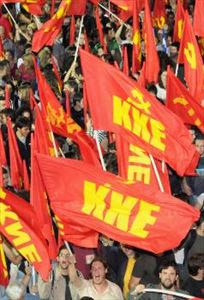 War is no chance happening, no “sin” as is thought by Christian priests (who are no whit behind the opportunists in preaching patriotism, humanity and peace), but an inevitable stage of capitalism, just as legitimate a form of the   capitalist way of life as peace is. Present-day war is a people’s war. What follows from this truth is not that we must swim with the “popular” current of chauvinism, but that the class contradictions dividing the nations continue to exist in wartime and manifest themselves in conditions of war” V.I.Leninó
The Communist Party of Greece (KKE) also deals with issue of war through the prism of Marxism-Leninism and proletarian internationalism, which it remains faithful to. The possibility of war and the involvement of Greece particularly concerned the recent 19th Congress of the KKE (11-14 April 2013). Important guidelines are provided in the Political Resolution regarding the preparation of the party in the case of such a possibility, as the developments completely vindicate Lenin, who underlined that war constitutes “an inevitable phase of capitalism, a form of capitalist life equally natural as peace”. The imperialist “peace” prepares the new imperialist wars. The KKE does not merely repeat the Leninist truths, but uses them as a basis, analyzing the specific socio-economic, political developments of our wider region, which are explosive and are creating a very dangerous situation for the lives of the workers. The specific article will refer to this approach of the KKE.