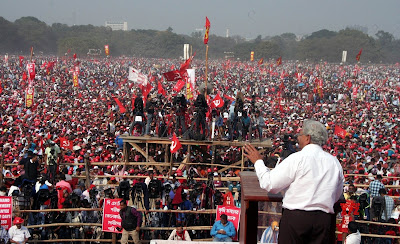 The upcoming elections and the need for collective people's struggle against the Bharatiya Janata Party (BJP) government was the major issue addressed by the speakers. Among those who addressed the huge crowd was the General Secretary of the Communist Party of India (Marxist), Sitaram Yechury, who sharply criticized the Modi government.
Read more » 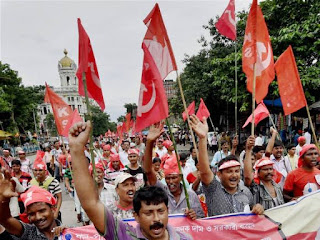 The KKE denounces the barbaric attack of the forces of repression against mass organizations of poor farmers and agricultural workers in Calcutta, India, yesterday (22/5). The demonstrators, who had the support of the Communist Party of India (Marxist) and the West Bengal Left Front, demanded relief measures and marched to the headquarters of the state government in order to hand over a memorandum with their demands. The forces of repression unleashed an assault , attacking the demonstration and journalists, with the result that 900 demonstrators were injured and 100 of them are in a critical condition.
Read more »