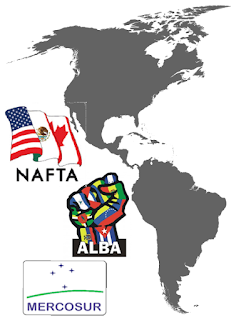 Class character of interstate unions in America.
By Pável Blanco Cabrera & Angel Chávez Mancilla*.
Source: International Communist Review, Issue 6, 2015.
A class approach that puts aside populist criteria is necessary, and this is done on a scientific basis, using the Marxist method of analysing reality, considering the degree of development of capitalism, the process of concentration and centralization in the imperialist phase, emphasizing what is general, without neglecting the peculiarities, and avoiding to place the part above the all. Marxist doctrine establishes the mutual connection between the phenomena of nature and society rather than analyse them in isolation. As V.S. Molodtsov noted "to deny the interdependence of phenomena goes against the possibility of knowledge as a single whole, as opposed to metaphysics Marxism-Leninism developed a truly scientific method of knowledge and transformation of reality. This method requires, first of all, considering all the phenomena of nature and society in mutual connection and interdependence"[1].
Read more »