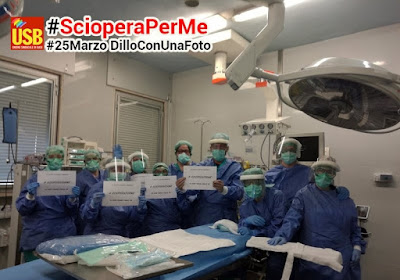 The strike comes as a response to the criminal policy of the government and big employers that denied the suspension of unecessary activity in industries and businesses during the COVID-19 outbreak, thus endangering millions of lives, including those of the workers.


The General Confederation of Italian Industry, Confindustria, stood against the strike in an effort to undermine the mobilization of the workers, but without success.

In the frontline of the struggle for the working people’s health are the doctors and the medical staff who are fighting daily, under difficult circumstances, against the COVID-19 pandemic which has severely hit the country.

Numerous trade unions, including the All-Workers Militant Front (PAME) from Greece and the World Federation of Trade Unions (WFTU), expressed their solidarity and support to the initiative of USB.

In the call for today’s strike, under the slogan “How many more deaths are needed for the government to understand that everything must be closed?” the USB was pointing out:

The new decree passed on Sunday evening by the President of the Council is the poisoned fruit of the veto of the bosses to a real blockade of the production of everything that has nothing to do with the emergency and safety of people’s lives. Giving in to the diktats of Confindustria and other employers’ associations is a very serious responsibility that will aggravate the cost of human lives that our country is already paying, taken to ensure that companies can return to profit.
Is it clear that the extent of the contagion and the number of victims is recorded in the very areas where production is strongest and where, given the cynical obstinacy of employers, thousands of workers are forced to transmit the virus and a high percentage of them become ill?
We called the general strike because it is urgency that all activities, that are not really essential, stop and in defence of all workers who will have to continue to remain in service, so that all the protections to which they are entitled can really be adopted. 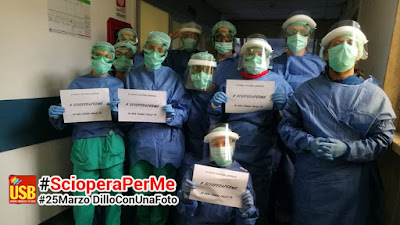 We have asked the President-in-Office of the Council to be received to represent the dramatic situation of a great many workers, starting with health workers, who are often forced to work in unbearable conditions, and to clearly define the penalties for employers who fail to do so. We will not accept that Confindustria should dictate the rules to the whole country and that it should actually establish the acceptable number of deaths that we will have to endure.
We call on all workers to take part in the general strike in the forms and manner that are possible today, while safeguarding the protection of citizens.
How many more deaths will it take to induce complicit trade unions to do their job, given that the bosses do theirs very well on their own?
LET MARCH 25TH BECOME A NATIONAL DAY OF GENERAL STRIKE FOR ANYBODY AND EVERYBODY!
The articulation of the general strike of 25 March 2020
The shift staff will participate in the strike from the beginning of the night shift of the previous evening.
The articulation of the general strike will have a different form of implementation only for workers employed directly in the rescue services to the population, who will implement the strike in symbolic form for the duration of 1 (one) minute to take place:
personnel in any capacity working in the health sector (doctors, nurses, OSS, auxiliary personnel or workers in any capacity and under any contract of employment) 1 minute between 1.30 pm and 2.30 pm on 25 March 2020
Municipal or local police staff involved in COVID 19 checks 1 minute at the end of each shift
staff employed to fight the pandemic in the ISS – Istituto Superiore di Sanità 1 minute at the end of each shift
staff in force at the National Fire Brigade Corps, 1 minute at the end of each shift
Transport personnel 1 minute at the start of each shift
staff of energy, gas, water supply companies, 1 minute at the beginning of each work shift
staff of companies providing Environmental Hygiene services, 1 hour strike at the beginning of each shift
staff of social cooperatives or employees of enterprises involved in the care and treatment of people, 1 hour at the end of the shift.
IN DEFENSE OF COMMUNISM ©