Workers, immigrants and refugees have been targeted by Trump's government for the sake of capital's profitability 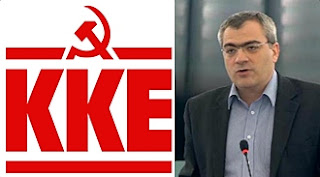 Speaking at the European Parliament's plenary during the discussion about "US travel restrictions", Kostas Papadakis, MEP from the Communist Party of Greece (KKE), condemned the new measures taken by the Trump administration. More specifically, Papadakis said in his intervention:

"The Trump choice reflects reclassifications between parts of the US capital. The unacceptable restrictions and repressive measures taken by the Trump administration consist a dangerous development. They have targetet millions of immigrants and refugees, the big victims of the capitalist system which the Trump administration manages. The aim is the maximum profitability of the US business groups to the detritment of american workers.

The movements for the economic protectionism of the US, which gather forces in their confrontation with China and attempt rapprochement with Russia accentuate the contrasts and initiate realignments.

The "Brexit", the support to the so-called "eurosceptics" consist a response by part of the capital in Europe which does not earn as much as it had counted within the framework of the EU, thus utilizing popular disconent. The cohesion of the EU and the Eurozone will be tested. The formation of other alliances, equally reactionary with the EU, is also possible.

The people must reject any alliance of the capital and must walk on the road of their own interests, for another, a new organisation of society and economy, freed from the chains of all "alliances of wolves" such as the EU and NATO."