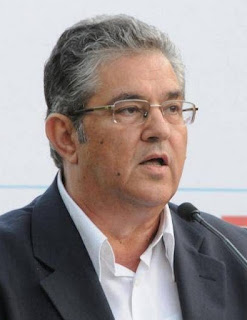 Abstracts from the interview of Dimitris Koutsoumbas, Secretary-General of the CC of KKE, in the weekend edition of the "Newspaper of Editors" (Efimerida ton Syntakton), Sunday 27 March 2016. You can read the whole interview here.

Q: The economic crisis and the refugee issue seem to be grist to the mill for the Far-Right. Almost everywhere in Europe, xenophobic and intolerant parties are strengthening. Why does it happen? Where is the Left? Why does it fail to affect the situation? Why it doesn't convince the working people?

Koutsoumbas: Today it is important to be widely realized that the so-called far-right, xenophobic but also the openly fascist parties are "brood" of the capitalist system's rotteness itself. They are created, used and connected with strong business interests and other centers of the capitalist establishment, having as an aim to divide the people in order to offer immunity to the same corrupt system- that creates poverty, crises, wars and refugees- as well as to enpower the authority of the big capital and the monopoly companies.

Therefore, as far as more (people) become aware of that and the struggle is organised towards this direction, the "Left" and the progressive powers in general won't shoot blank ammunition. In order to permanently isolate and decidedly fight the monster of fascism, you must hit the "womb" that gives birth to it. Only towards this perspective ideals can be reborn, in a way that the working-people's movement can be effectively recreated and counterattack.

Q: Some opposition parties ask for a unity government ("national consultation government"), while New Democracy moves towards the "mature fruit" logic. What does KKE propose?

Koutsoumbas: It is clear that, right now, New Democracy promotes the logic of a "phony depole", like the bipartisanship in the past; a choice that currently seems to suits Syriza too. The continuously collapsing Pasok, alongside its political flirt towards Syriza, pursues today a broader collaboration-complicity with the participation of other parties, like Potami and New Democracy.

Against these choices of the basic bourgeois and pro-memorandum parties, KKE is completely opposite, exactly because these choices have as a component the application of the anti-people reforms and measures. KKE proposes the creation of a new large People's Alliance that will lead to the total overthrow of the anti-people politics, with a completely new, radically different plan for the economics of working-popular interests, in a society without exploitation, with total fundamental changes.

Q: The Communist Party of Portugal participates in a coalition government with social-democrats and the Left Bloc. Is the choice of your comrades wrong?

Koutsoumbas: We have a very good relation of co-operation with the Portuguese CP within the framework of the International Communist Meetings that take place every year, as well as bilateral and regional relations within the (meetings of) european communist and workers' parties. I have to say that we discuss and clearly state our point of view for issues related to our countries and the international movement. We exchange opinions and in some issues we agree, while in some other issues we disagree.

Apparently, we have a different viewpoint- based also on the experience of our country- regarding choices of supporting various bourgeois governments, in Greece, Portugal and elsewhere. Of course we are following the developments with interest, being sorrowful for difficulties and failures such as, for example, the very bad result of PCP during the recent presidential elections- which was it's lowest electoral percentage for decades and which came up after it's choice to support the socialists' government in Portugal. Anyway, I refer to this fact because, here in Greece, some people, being ignorant of history, combine the high electoral results of communist or other left parties with their political collaborations, with their participation or support in wider co-operation governments.

Q: KKE demands (Greece's) exit from the EU and the Eurozone. The same position is supported by groups of the extra-parliamentary Left. Why don't you start a dialogue with them? Keeping pace (with them) in the basics isn't a precondition for the strengthening of the anti-capitalist forces?

Koutsoumbas: Let's call spade a spade; the exit from Eurozone and the EU isn't a demand only of those you refer in your question, but also of others: Schauble and other parts of the German bourgeoise, which during the last elections in the three federal states of Germany supported the xenophobic party AfD, while Cameron in Britain holds a referedum about the exit from the EU, although they aren't part of the Eurozone. And many others, even Le Pen in France and the Golden Dawn's criminals in Greece.

Do you see anything common between all these powers in that particular issue? They (translator note: he refers to the abovementioned bourgeois powers in Germany, Britain, France and part of the european far-right) seek to serve better the interests of parts and sectors of the monopoly capital, under another currency, within other coalitions and imperialist unions and within the same exploitative capitalist system unchanged and in full power. This is not a small detail.

Unfortunately, also some leftists, some other anti-capitalist powers face this issue as a detail, as a sub-theme, thus playing the game- perhaps unknowingly- of the big capital and it's barbaric unions.

The major criterion for the strengthening of the anti-capitalist powers and the consistent anti-capitalist struggle is the essential connection of the exit from the EU with the struggle for a working class-people's power, for building a new society which will have in her own hands the wealth produced by the working people in order to plan the economy for the interests of the people's needs.