Venezuela: The PCV is in the streets to confront the anti-popular policies of the Maduro government 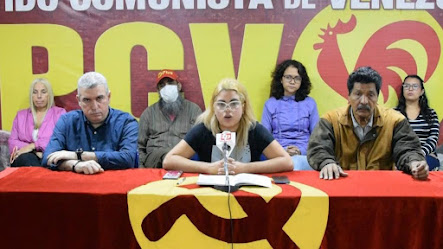 "The PCV is in the streets, fighting for the construction of the broadest unity of action to confront the offensive of capital and its allies in Miraflores," affirmed Janohi Rosas, member of the Political Bureau of the Central Committee of the Communist Party of Venezuela, during a press conference this Monday.

The statements coincided with a new national day of protest by the education workers, who had planned to gather outside the Ministry of Education but had to concentrate in the surroundings of the Central University of Venezuela after the National Government ordered a last minute partisan act to avoid the protest.

The popular response was thousands of teachers marching towards the center of the capital to demand the dignity of the profession and the restitution of the violated rights.

The workers not only face "the effects of the capitalist crisis and imperialist aggressions, but also the anti-popular policies of the Maduro government," said Rosas.

Since the restart of classes, the Venezuelan teachers have been in the streets demanding decent salaries and last Sunday, Teachers' Day, the Executive tried to mitigate the discontent with a bonus and disqualifying the mobilizations as destabilization attempts.

"The world upside down: they label the workers and the PCV as extreme right wing for demanding rights and the one who sits down to negotiate with the reaction is the Government of Maduro in Mexico", affirmed the National Secretary of Organization of the PCV.

Rosas informed that the party of the Red Rooster held this weekend a National Plenary of Education Workers in view of the urgent need for organization, mobilization and defense of the historical conquests of the sector.

For the PCV, President Maduro's Annual Report and Account was rather the presentation of inflated figures that are encouraging for the capitalists and that do not reflect the daily reality of the Venezuelan people.

The message presented before the National Assembly "shows the complete disconnection of the President with the daily life of the working class that in the face of this is organizing to fight for their just demands."

"The PCV complied with not going to that pantomime and, as we have always done, we remain on the side of the working class and in defense of the struggles that have been developing", he added.

Government detained sidoristas to neutralize the protests in Guayana

The PCV expressed its solidarity with the workers of Sidor and of the basic industries of Guayana, who for several days kept protesting for wages.

"We know of all the deterrents used by the Government to divert the objectives of these protests", said Rosas.

"What did the National Government do? it arrested Sidor workers; it harassed union leaders and established a negotiation table to propose again wage bonus measures", he added.

Solidarity with the Peruvian people

The Communist Party sent a message of solidarity with the struggles of the Latin American people, "very particularly with the Peruvian working class that is the victim of a brutal repression that has left in recent days more than 40 assassinations."

"Today a State of Emergency has been imposed that intends to contain the struggle for elections and a National Constituent Assembly", explained Rosas.