World Cup 2022: Workers' deaths in Qatar, a massive labor sacrifice at the altar of monopolies' profitability 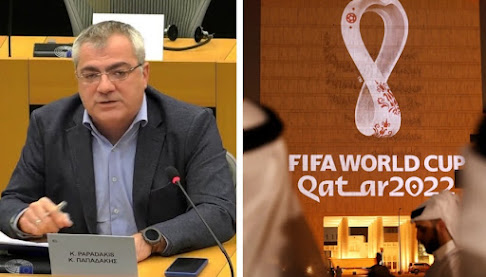 On Monday 14 November, the Subcommittee on Human Rights of the European Parliament discussed the issue of workers' rights ahead of the 2022 World Cup which will take place in Qatar. The discussion was attended by the Qatari Labour Minister Ali Bin Samikh Al Marri.

In his intervention, the MEP of the Communist Party of Greece (KKE), Kostas Papadakis, pointed out the following:

“Thousands of dead workers as well as injured ones, 90% of whom are immigrants, have been recorded since the beginning of the World Cup construction works in Qatar. These aren't occupational accidents but employer crimes, a massive labor sacrifice in the multi-billion business between Qatar, FIFA, construction groups and sponsors who are profiting. It is indicative that complaints about non-payments have been doubled reaching 35,000 while strikes and trade unions are prohibited, with Labor Minister being a... “former human rights activist”.

Any discrimination based on gender and sexual orientation by the Qatari authorities must also be condemned. The crocodile tears of the EU are deeply hypocritical, since EU groups and donors are leading this hell.

The fact that many athletes, sports fans stand up and denounce this crime is particularly hopeful. The solidarity towards the workers in Qatar, for the protection of their lives, health and rights, for full compensations to the families of the dead and disabled workers, must be strengthened.

The confrontation with employers, the state, the bourgeois governments and the system of exploitation is the only way for the workers of the world to defend their rights and freedoms”.