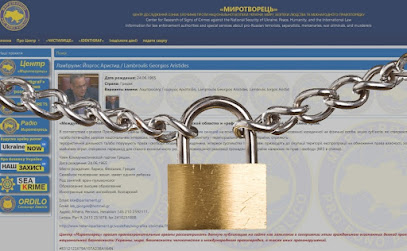 Following a Goebbels-like method, Myrotvorets acts like a public black-list, exposing personal details of people without their consent. This is not only a despicable practice, but also a very dangerous one. Individuals whose personal details have been published on the site have been subject to murderous actions, threats and harassment.

Myrotvorets was launched in December 2014 by Anton Gerashchenko, then advisor at the Ukrainian Ministry of Internal Affairs who later served as Deputy Minister. Gerashchenko himself has indicated that the founder of the site is a guy named Georgiy Tuka who headed the Luhansk regional military-civil administration during 2015-2016. According to a report released by human rights platform “Uspishna Varta”, the Ukrainian Ministry of Internal Affairs, the Security Service of Ukraine (SBU), departmental and other law enforcement bodies of the country were listed as partners of Myrotvorets until May 2016.

On 10 May 2016, the site published the personal data of 4,068 Ukrainian and foreign journalists who were allegedly accredited to work in the “People's Republic of Donetsk”. In particular, Myrotvorets published the names, phone numbers and addresses of journalists working in prestigious international media, such as Reuters, AFP, BBC, Al Jazeera, Le Monde, etc.

Following severe criticism by unions of journalists and human rights groups, as well as after the launching of a criminal case against the website's administrators, Myrotvorets was temporarily closed down. However, a few months later the site resumed its work and even updated the black-list of journalists and other persons.

Being blacklisted on Myrotvorets can have serious consequences, including the risk of being killed. It must be mentioned that two pro-Russian figures, publicist Oles Buzina and legislator Oleh Kalashnikov, were shot dead in Kiev in April 2015, just days after Myrotvorets published their personal information, including home addresses.

Among those who are included in the black-list of Myrotvorets are three cadres of the Communist Party of Greece (KKE). More specifically, they are: Giorgos Lamproulis, MP and Vice President of the Greek Parliament; Sotiris Zarianopoulos, former MEP and Giorgos Manganas, cadre of the KKE. The three Greek communists have been characterized as “personae non grata” because in the past they visited Ukraine and expressed solidarity to the Ukrainian people and the local persecuted communists.

Following a Presidential Decree issued in December 2015, their names were included in the list of 388 natural and 105 legal entities to which the Ukranian government imposed sanctions under the pretext of being “enemies of the country”.

The EU Parliament Group of the KKE brought the issue to the attention of the Vice President of the EU Commission and High Representative of the Union for Foreign Affairs and Security Policy Josep Borrell. In a question addressed to Borrell on 11 May 2022, KKE MEP Kostas Papadakis was stressing out:

“The ‘myrotvorets.center’ website publishes personal information and data (name, postal address, e-mail address, etc.) of those regarded by its managers as ‘enemies of Ukraine’ and ‘associates of terrorist organisations’. It has been officially operating under the ‘aegis’ of Ukrainian government ministries since August 2014. Thousands of people have been targeted and information contained on the site is being used by the Ukrainian judicial authorities for the purpose of bringing charges against those concerned.

Among those on the website’s ‘blacklist’ are three Greek Communist Party officials: Sotirios Zarianopoulos, former MEP, Giorgios Lamproulis, Deputy Speaker and Member of the Greek Parliament and Vice-President of Parliament, and Giorgos Manganas, all of whom have been classified as ‘personae non gratae’ in Ukraine since 2015.

This is a matter of particular concern in the light of subsequent attacks on many individuals targeted by the ‘myrotvorets.center’ website.

An enormous amount of responsibility for this lies with successive Ukrainian governments that have, since 2014, been making use of such resources and effectively condoning the attacks.

In view of this:

Can the VP/HR make known his position regarding the unacceptable targeting of these Communist Party officials, one of whom is a former MEP, and the dangerous and spurious attempts to link them with ‘terrorist organisations’?”

In his response, the European Commission admits that is aware of the existence of the website and “has raised the issue” with its Ukrainian counterparts. Here is the answer provided by the High Representative/VicePresident Josep Borrell I Fontelles:

The operation of this website raises serious concerns. In the framework of the EU-Ukraine Association Agreement, the EU and Ukraine have agreed to cooperate in order to ensure an adequate level of protection of personal data in accordance with the highest European and international standards.

The EU has raised the issue of this website with the Ukrainian counterparts and will continue to engage with them on the topic.” (https://www.europarl.europa.eu/doceo/document/E-9-2022-001760-ASW_EN.pdf)

The explanations given by Mr Borrell aren't convincing at all. The EU has been informed about the inclusion of the KKE cadres in Myrotvorets list since 2015 and nothing happened. Since the 2014 coup, the EU has supported all the bourgeois governments of the Ukraine within the frame of its imperialist competition with Russia. The EU bears huge responsibility for what is happening in Ukraine including the anti-communist campaign, the ban on the Communist Party and other opposition forces, the persecutions against militant communists such as the Kononovich brothers, the criminal activity of neo-Nazi groups which operate under the protection of the state, etc.
Spread the word!
The struggle for the closure of Myrotvorets must continue unstoppable. The pressure upon the Ukrainian government and the European Union, must be strengthened. The issue has to be brought to the major human rights organizations, including the United Nations.

It is evident that the existence and operation of Myrotvorets consists a blatant violation of personal data, but most significatly a threat for many people whose names are listed in the website. Through this article we call every comrade, as well as every progressive and democratically minded person, to support the fight against the unacceptable targeting of people and to demand the immediate and permanent closure of the Myrotvorets death-list.