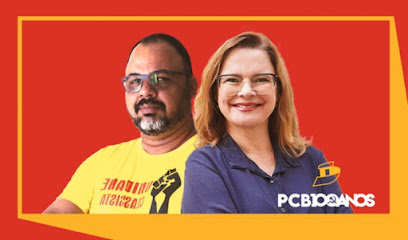 The Brazilian Communist Party (PCB) has presented its pre-candidates for the presidential election of October 2nd. Sofia Manzano, professor and economist, is the presidential nominee and Antonio Alves, trade unionist, has been selected as the candidate vice president.
The PCB candidates have presented an anti-capitalist political program while engaging in dialogue with workers throughout Brazil about their needs and demands.
According to the Brazilian Communist Party, the country is currently experiencing the biggest crisis of the last half century – an economic, social and political crisis, aggravated by the health situation that exposed the chronic illnesses and shortcomings of brazilian capitalism. This crisis Brazil, despite its particularities, is part of the systemic crisis of world capitalism, the consequences of which will continue to have profound impacts on the people's lives.

This crisis – says the PCB – was exacerbated by more than three decades of “neoliberal” policies which dramatically reduced economic growth, deepened the de-industrialization process, handed over public assets to national and international capital, squandered public funds in favor of large monopolies, reduced the rights and wages of workers, youth and pensioners, led to worse working conditions.

In face of the October elections, although it recognizes that Bolsonarism is the main threat to the working class, the PCB independently presented its pre-candidates, its program and its revolutionary aims. The Brazilian Communist Party mades clear that it cannot ally itself with reformist political alternatives which propose the defeat of Bolsonaro throught a big alliance between popular movements and putschists, between the working class and its exploiters. The 13 years of Workers' Party (PT) governments clearly show that such “alliances” favor the aims of the bourgeoisie, disorganize and disorient the working class and its political struggle, thus preparing for disastrous defeats.

The Brazilian Communist Party has formed a anti-capitalism and anti-imperialist political programme which puts forward a popular and revolutionary alternative focused on the autonomy and independence of the working class which is necessary to take the country out of the crisis and advance the social and political transformations in Brazil through the construction of people's power and socialism.

Among the main proposals of the PCB are the abolition of all neoliberal measures, the creation of the Social Responsibility Law which will ensure resources for education, health, sanitation, social programs and public investments, the fight against unemployment and hunger, the re-nationalization of strategic companies (Vale, Embraer, CSN, Eletrobras, Petrobras, etc), the reconstruction of domestic debt, a tax reform, the confiscation without compensation of all large land properties, the creation and expansion of a truly public health system, the abolition of High School Reform and nationalization of higher education institutions, a policy to combat all forms of oppresion (including racism, LGBTphobia, etc), the defense of the rights of persons with disabilities, the nationalization of the public passenger transport sector, etc. The full programme is accessible in Portuguese here: https://pcb.org.br/portal2/29060.

The presidential pre-candidates of the Communist Party (PCB) 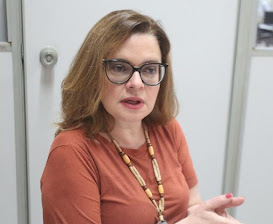 She has participated in all Party Congresses since the 9th PCB Congress in 1991. In 1992 she joined the CentralCommittee for the Revolutionary Reconstruction of the PCB. Being active as a university student, Sofia Manzano played an important role in the reorganization of the Union of Communist Youth (UJC).

She was a candidate for vice president of the republic, in 2014, on the ticket with Mauro Iasi.
Sofia Manzano in Social Media:
Facebook: https://www.facebook.com/SofiaManzanoPCB
Twitter: @SofiaManzanoPCB
Instagram: @sofiamanzanopcb
ANTONIO ALVES for Vice President 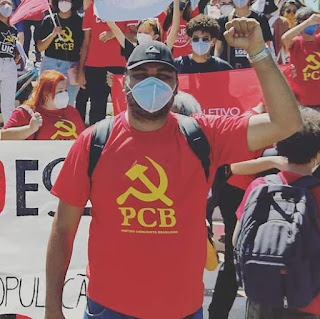 Antônio Alves da Silva Júnior was born in Recife in 1978 to a working class family. From a young age he became engaged in hip hop music, participating actively in the local United Black Movement (Célula do Movimento Negro Unificado) in the city of Paulista. He became a member of the Union of Communist Youth (UJC) in 1999, taking part in the union's culture nucleus.

In 2006 he worked at the Civil Defense Coordination of Recife (CODECIR). Alves was a founding partner of the Metropolitan Association of Hip Hop of Pernambuco, while he studied Social Communication and Journalism.

Since 2016 he participates actively in the ranks of the working class movement and particularly within the Brazilian Communist Party, becoming a member of the PCB's Central Committee at the XVI National Congress in 2021. In 2022, the year of the Party's centenary, Antônio published the book “Guia Pratico de Agitacao e Propaganda” (A Practical Guide to Agitation and Propaganda).