"The KKE is at the forefront of the anti-war, anti-imperialist movement and the workers–people’s movement" 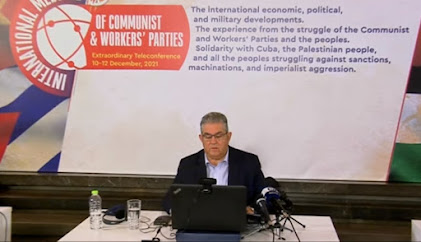 The following text is the introductory speech delivered by the General Secretary of the CC of the Communist Party of Greece (KKE) Dimitris Koutsoumbas at the Extraordinary Teleconference of the International Meeting of Communist and Workers' Parties (IMCWP), under the subject:
"The international economic, political, and military developments. The experience from the struggle of the Communist and Workers' Parties and the peoples. Solidarity with Cuba, the Palestinian people, and all the peoples struggling against sanctions, machinations, and imperialist aggression".
"Dear comrades,

Greetings from Greece! We welcome you to the extraordinary teleconference of the International Meeting of Communist and Workers’ Parties.

It is a reality that the pandemic has partly limited in-person communication among the Parties.

However there can be no limitations on the necessary coordination and struggle of the peoples, of the Communist and Workers’ Parties.

This is the message of today’s extraordinary teleconference, through which we reiterate our condemnation of the blockade against Cuba by US imperialism; we express our full solidarity with the CP of Cuba and its people, who, once again, under difficult and complex conditions, defend the achievements of the Cuban Revolution.

We express our conviction that the destabilization plans against Cuba drawn up by imperialism will fail; that they will be once again averted by the Cuban people.

We send a message of internationalist solidarity with the struggling Palestinian people, who, in spite of the negative correlation of forces, have been fighting for decades for the recognition of their homeland.

We denounce the Israeli aggression, the support provided by US and EU imperialism to Israel to continue repressing an entire people.

We denounce the equation of the victim and the perpetrator fostered by the EU and demand that the Greek government as well implements the resolution of the Greek Parliament for the recognition of the Palestinian state on the 1967 borders, with East Jerusalem as its capital.

Of course we stand at the side of all struggling peoples who rise up against anti-popular policies, such as:

-The victorious, months-long struggle of the farmers in India.

-The poor strata of Turkey protesting against the rapid deterioration of their standard of living.

-The people of Sudan who are clashing with coup plotters in the streets.

-The peoples in many countries that, despite the pandemic, struggle their health, their life, their social and political rights.

You should know that the KKE in Greece is at the forefront of the struggle for the protection of workers’ health under conditions of the pandemic.

It supports a comprehensive framework of demands, focusing on the reinforcement of the public health system.

At the same time, our Party stands at the side of the workers, who, through their struggle, demand protective measures, collective agreements, salary increases and fight against the anti-popular measures of the government.

In recent period, this effort highlighted important and victorious struggles such as that of the COSCO workers and the e-food workers.

More and more workers, scientists, and young people embrace the “Call for Militant Alignment with the KKE”, expressing their willingness to conflict with anti-popular policies, with the repression of democratic rights, with foreign US-NATO bases and plans.

To open the path for the Social Alliance between the working class and the other popular strata, which will reverse anti-popular measures and rally mass people’s forces in a line of conflict with monopolies and capitalism.

The communists in Greece are working on this necessary direction, which is underscored by our era and developments in the international imperialist system.

This is the era that dictates the final overthrow of capitalist barbarism and the construction of a new socialist–communist society, free from shortcomings and mistakes of the past.

That does not mean that we overlook the difficulties caused by the negative correlation of forces at a global level and the important inter-imperialist contradictions that are taking place in our region and internationally. 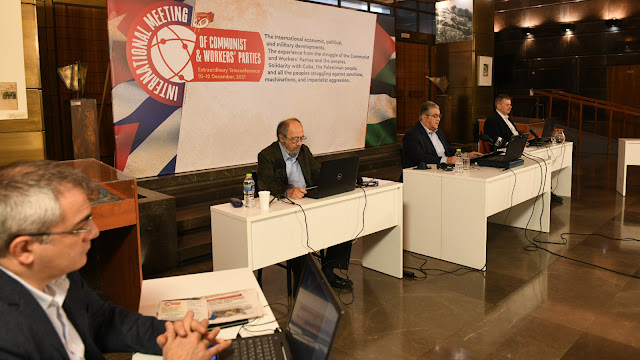 In contrast to other political forces, we assess that the USA does not withdraw - it is still present.

In Greece it is reinforcing its military bases that are growing even bigger.

As a matter of fact, it forms new imperialist unions, such as AUKUS (with the UK and Australia) and QUAD.

These are new, multifaceted tools of imperialist plans that emerge next to older ones, such as NATO.

Of course, the orientation of the USA, as demonstrated by the withdrawal of military forces from Afghanistan and the various trade wars in the past years, is shifted to the Indo-Pacific region.

NATO, despite the internal friction among the bourgeois classes that constitute it, continues to elaborate new military plans against other peoples.

It is particularly taking action against capitalist Russia, from the Baltic to the Black Sea.

It is taking measures to sharpen competition with China.

In no case can imperialist EU play a “progressive” role in inter-imperialist contradictions. We strongly believe that this notion is an illusion.

We consider that the calls to wean the EU off the USA and NATO expressed by various forces of the complete bourgeois political spectrum, from neoliberal and social democratic powers to opportunists of all hues, are trying to pull the wool over people’s eyes.

The EU was and is a union which will progressively become more reactionary and anti-popular.

The real way out for the peoples is not the so-called “democratization” and “humanization” of the EU and NATO but the struggle for the disengagement of the countries from these imperialist alliances in combination with the struggle for the conquest of power by the working class and its allies in each country.

That was demonstrated by the experience gained from BREXIT. A disengagement which is not combined with radical changes at the level of economy and power at each individual country, group of countries, and across Europe cannot be in favour of people’s interests.

Issues of the so-called “green” growth and “digital transition” are more and more included in the plans of the bourgeois classes in the current phase.

Those issues constitute on the one hand a field to channel over-accumulated capital to intensify the exploitation of the workers and on the other hand a field of fierce competition among the monopolies (US, Chinese, German, French, British, Russian, etc.).
We witness the sharpening of contradictions between the USA and China over supremacy in the imperialist system, as well as contradictions with Russia or within the Euro-Atlantic imperialist axis.

Of course we believe that this situation cannot be characterized as a “new cold war”, copying the former confrontation between the USA and the USSR.

The dialectic analysis of developments shows that we are dealing with contradictions that are manifested in the framework of the capitalist mode of production that dominates the most powerful forces conflicting for the profits of their own monopoly groups.

In these circumstances, it is important to oppose imperialist war as well as to refuse to choose between one or the other imperialist, to reject any “old” or “new” imperialist alliances, to struggle for the disengagement of the country from imperialist plans and alliances and strengthen the struggle for workers’ power, socialism.

In this regard, the KKE voted against the aggressive agreements of Greece with the USA and France in the Greek parliament, which are presented as “defensive” to manipulate and disorientate the people.

It took a stand against the excessive military expenditure of the country and highlighted that they are taking place in an effort of the Greek bourgeoisie to enhance its position in imperialist plans and organizations.

The communists systematically illuminate the people and mobilize thousands of workers and young people.

The KKE is at the forefront of the anti-war and anti-imperialist movement, of the workers’–people’s movement, to prevent the creation of new military bases in Greece, to dismantle all US–NATO bases and infrastructure, to hinder the transfer of nuclear weapons to the country.

The KKE demands that the participation of the Greek armed forces in imperialist missions abroad should be stopped.

That the people should not pay for military equipment that serves the aggressive plans of the Greek bourgeoisie and Euro-Atlantic interventions and wars; that Greece should not participate in military exercises that turn against other states.

The KKE seeks to strengthen internationalist solidarity with all peoples who are faced with imperialist interventions and wars. It struggles for the disengagement of the country from the imperialist unions of NATO and the EU.

In order for the working class and the people to seize power and build the new socialist society!
inter.kke.gr