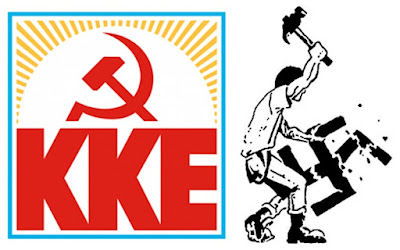 "Today's cowardly and murderous attack by fascist criminals against members of the KKE and KNE, when they were on a political excursion distributing the Call of the Party's Central Committee in Ilioupoli, Thessaloniki, comes as a continuation of the fascist attacks in Thessaloniki and other places during the last days and consists an attack against the people and the youth as a whole that will not go unanswered by the workers-people's movement. It is the mass popular action that will isolate and crush the fascist criminal elements.

A year after the conviction of the criminal Golden Dawn it is proved that fascism remains a useful weapon and multi-tool of the system, which does not hesitate to use it against the movement, against the communists who lead the organization and strengthening of popular struggle.

Those government officials, politicians, journalists and other members of the establishment who, all these days, equate the criminal, nazi violence with the struggle of the people and the activity of the KKE thus reproducing the “two extremes” theory, are not free from liability for these incidents. Through this way they acquit and finally arm the hands of the fascists. The ND government bears huge responsibility for the tolerance towards such groups by party officials and state mechanisms.

Those who think that through this way they will obstruct the activity of the KKE and KNE and their pioneer contribution in the organization of the workers-people's struggles are deeply mistaken and ignorant of history. The militant aligning of the people and the youth with the KKE is getting stronger and will get even stronger, targeting the system the breeds poverty, exploitation, wars, fascism-nazism".

It is reminded that on Sunday 3 October, at noon, a gang of 10 to 15 fascists armed with thick chains, knives and even tasers launched a brutal attack against members of the KKE and KNE in Ilioupolis, Thessaloniki, injuring at least three to four people.