"TMC has to be dethroned to stop the juggernaut of BJP in Bengal", pointed out in his speech the General Secretary of the Communist Party (Marxist) Sitaram Yechury. "We shall fight to ensure equal rights for men & women from all sections of society, and against onslaught on pluralistic expression" said Surjya Kanta Mishra, West Begal State Secretary of CPI(M). 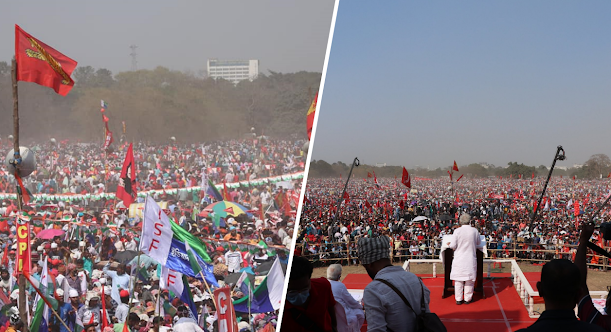 As the Communist Party (Marxist) mentioned in its Facebook account "by conservative estimate around 10 lakh (1 million) people from all walks of life came to the Brigade Parade Ground in Kolkata today. To stop saffronisation, privatization and corruption in education system, to restore democratic rights of the people, to ensure free and fair election, many other issues, people of all ages came and registered their presence in what was one of the world's largest peaceful political gathering".