From "heroes" to "villains"... Greek government persecutes healthcare unionists for their political activity 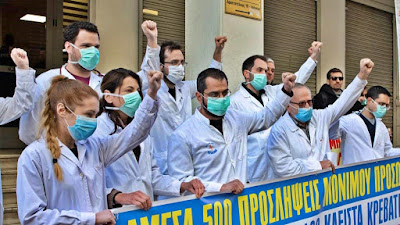 A year before, Greece's Prime Minister Kyriakos Mitsotakis and members of his government were praising doctors, the “health heroes” as they called them, for their fight against the Coronavirus pandemic. The government had even urged the people to show their appreciation to the country's healthcare workers by applauding them from their balconies.
But, apparently, the healthcare workers are “heroes” as long as they remain silent and do not fight for the rights of their co-workers and society. Recently, the president of the National Federation of Doctors of Public Hospitals (OENGE) Afroditi Retziou received a call for questioning by Greek Police, because the Federation mobilized and organized protests demanding from the government the recruitment of doctors, as well as more protection material and safety measures for healthcare workers!

In a statement concerning her call by the police, Retziou said:

We will continue to do our task, the one dictated by our conscience.

If they think that we will remain silent by doing nothing in face of the continuous crime against the heath and life of our patients, they are deeply mistaken”.

Afroditi Retziou isn't the only case. Other unionists from the healthcare sector have received calls by the Police in order to “apologize” for their militant activity.

In the midst of the Covid-19 pandemic, this is another provocative action by the conservative ND government which seeks to silence any voice that reveals the tragic shortages in hospitals and generally the dangerous governmental policy which risks the lives of thousands of people.

As pamehellas.gr points out, “the government, in the face of the third wave of the pandemic, a year after its outbreak, has funded billions to big business, tourism groups, and aviation companies. They ran to buy police and repression equipment and want to bring thousands of special guards, cameras and police to Universities, Metro, and wherever else they can imagine. But they insist on not hiring drivers for public transport, teachers for schools, and medical staff for hospitals!

In order to defend its barbaric policy that sacrifices the life and health of the people for the profits of the few, it launches a mechanism of intimidation and repression against those who oppose it. As the Iron Heel, it legislates night and day measures against anyone who fights and claims, prohibits demonstrations, seeks to silence and intimidate any demanding voice.”

Persecutions and intimidation shall not pass and the struggle of the workers in every sector will continue and expand.
IN DEFENSE OF COMMUNISM ©