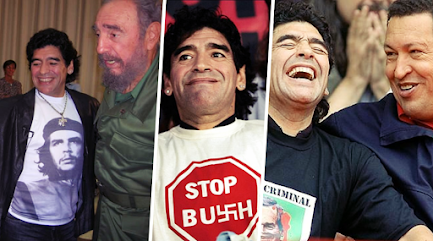 Born in 1960 in Lanús, Buenos Aires, Diego was the fifth child of a poor, working class family. His father was a factory worker and the early years of young Diego were marked by extreme poverty. Over the decades, alongside his extraordinary career in football, Maradona proved to be a defender of the less privileged, a vocal supporter of Cuba and Latin American left-wing movements and an outspoken critic of U.S. imperialism.
Following the example of his heroic compatriot Ernesto Che Guevara, he supported the fight for equality and justice in the region and internationally. He had the famous portrait of Guevara tattooed on one of his arms and the face of Cuban leader Fidel Castro on one of his legs.

Maradona never feared to publicly express his political and social views. He first visited Cuba in 1987, just a year after the Argentine national team won its last World Cup in Mexico. Since then he established strong friendship with Comandante Fidel Castro, whom he deeply admired and regarded as a second father.

"They say that he started with twelve men and three rifles in the Sierra Maestra and now I realize why he won: He has an iron conviction. Fidel Castro is a personality impossible to forget", Maradona was pointing out to Prensa Latina on July 1987 after his meeting with Líder Máximo.

The political charm of a revolutionary genious like Fidel left a powerful impact on Diego who became a frequent visitor of Cuba. In 2000, Fidel invited Maradona to La Pedrera clinic as he was struggling with drug addiction and needed rehabilitation. The Argentine superstar would never forget what Fidel and Cuba did for him. Five years later, in 2005, Diego interviewed Fidel on his TV show which was conducted in Havana and lasted almost five hours.

During the interview, Maradona promised Fidel to head the protest against the visit of the then U.S. President George W. Bush to Argentina. "I think Bush is a murderer... I'm going to head the march against him stepping foot on Argentine soil", Diego had said.

And, indeed, on November 4th, 2005, the iconic athlete joined a large anti-imperialist demonstration in the coastal city of Mar del Plata where the Summit of the Americas was taking place. He was wearing a "Stop Bush" T-shirt, with the "S" in Bush being replaced with a swastika. 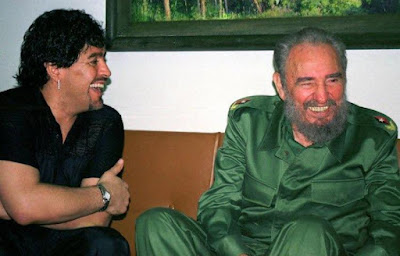 Talking about Fidel in 2014, Maradona pointed out:
"I felt a great pride inside, he would call me on the phone at two in the morning and we would talk about soccer and a lot of things. And we talked about politics too and he taught me a lot. He's a man who only slept four hours and worked all day. Fidel taught me a lot of things that I didn't know and that he taught me better than anyone."

When the great Cuban leader died in November 2016, Diego was in Croatia attending the Davis Cup final. "I wept uncontrollably", Maradona told reporters, “he was like a father to me... He opened the doors to Cuba to me when Argentina was closing them on me”. Shortly after, he travelled to Cuba to attend the funeral of Comandante and pay his respects to his "second father".

Diego Maradona was also a supporter of the Bolivarian process in Venezuela and a fierce critic of U.S. imperialist interference in the country. He had visited the country several times, meeting with Hugo Chavez and other Latin American leaders, including Bolivia's Evo Morales.

In 2007, Maradona appeared on Chavez's weekly television show where he stated:
"I believe in Chavez, I am Chavista ... . Everything Fidel does, everything Chavez does for me is the best (that can be done". At the same time, Maradona denounced the U.S. hostility against Cuba and Venezuela by saying: “I hate everything that comes from the United States. I hate it with all my strength”.

When Chavez died, Diego visited his tomb along with President Nicolas Maduro, with whom he would later establish a friendship. “What Hugo left me was a great friendship, an incredible political wisdom. Hugo Chavez changed the way Latin America thinks. We were bowed to the United States and he showed us that we can walk by ourselves”, said Maradona after Chavez's death.

He continued his support for the Bolivarian process, being a political proponent of Nicolas Maduro. “Don't give up. In soccer it doesn't matter if you lose three to zero, never give up. You never gave up and you're giving everything for Venezuelans. Long live Maduro!” he said during a visit in Caracas and added: “We're soldiers of Nicolas, I came here to give him my support". 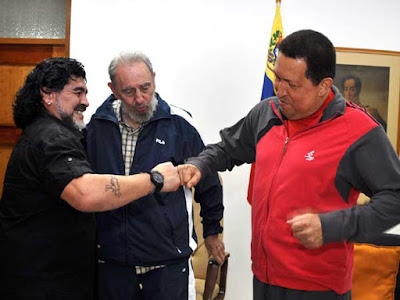 In 2017, when the U.S. and the right-wing Venezuelan opposition tried to create instability in the country, Maradona expressed his unwavering support to Nicolas Maduro and the people of Venezuela.

“We are chavistas until death. When Maduro orders, I am dressed as a soldier for a free Venezuela, to fight against the imperialism and those who want to take our flags, which is the most sacred thing we have.Long live the revolution!!!”, Diego wrote on his official Facebook page.

When the U.S-backed opposition leader Henrique Capriles criticized the former football player for supporting Maduro, claiming that Maradona wouldn't support the government "if he had to live with only 15 dollars per month", Diego fired back: “Capriles, don't victimize with me. I know very well what it is to live with seven brothers and not have anything to eat. I wish we had had those 15 dollars! The difference between you and me is that I never sold out".

One can say many things about the life of Diego Maradona, his various addictions and mistakes. However, nobody can deny his staunch and consistent anti-imperialist stance. In the end of the day, the legendary football star remained faithful to Fidel's advice: "Ideas are not negotiated".