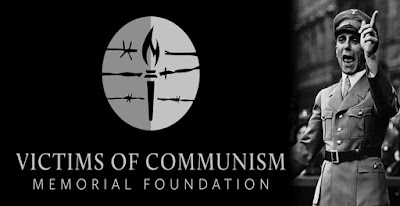 According to VOC executive director Marion Smith “China was lying and misleading the rest of the world about the virus that originated in Wuhan”, while “the WHO abdicated its responsibility to the entire world population in order to carry water for the Chinese Communist regime”.

Of course, it’s not the first time that this Foundation makes such schizophrenic claims. After all, VOC was founded precisely in order to vilify socialism-communism through the blatant distortion of history and spread of unfounded, Goebbels-inspired propaganda. Their argument about the – supposed - “millions of victims of communism” is nothing but a fabrication of their sick imagination.

Through their new despicable announcement they try to conceal the fact that the COVID-19 pandemic exposed the disaster that capitalism has brought to public healthcare. The “goebbelists” of VOC talk about the “victims of communism” and attack China, while new mass graves are being dug in New York. They blame the Chinese leadership, while thousands of people in the U.S. are dying because they have no health insurance!

Coronavirus’ deaths, especially in Europe and the U.S, are a result of the privatization and commercialization of healthcare. The hideous anti-communist propaganda of VOC and other bourgeois institutions cannot hide the inhumane reality of capitalism.