Internationalist Solidarity - More than 400,000 tea workers in India are on strike demanding a 20% pay rise 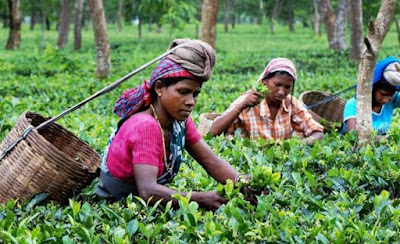 The World Federation of Trade Unions (WFTU), which represents more than 92 million workers from the 5 continents of the globe, has expressed its solid support and full solidarity with the hundreds of thousand workers in tea plantations of Darjeeling in India, their fair struggle and demands.

From its side, on behalf of the class trade unions and the movement of Greece, the All-Workers Militant Front (PAME) issued a solidarity statement, pointing out that "the striking land workers are demanding wage increases. The present wages are poverty wrinkles while on the other hand the monopolies are continuously increasing their profits. PAME supports the workers' struggle and calls upon all trade unions to stand by their side by all means."
Since Tuesday, hundreds of thousands of tea plantation workers in eastern India have been on a three-day strike demanding a 50 cent increase in their daily wage from the government and estate owners.
The strike in the Himalayan foothills of West Bengal state, close to the picturesque Darjeeling hill station, stopped work at most tea estates in the region.
"More than 400,000 workers from around 370 tea gardens are participating in the three-day strike," Aloke Chakraborty, president of the central committee of united union of plantation workers, told AFP.
"The minimum daily wage for a worker at the plantation is 169 rupees. We have demanded a 20% raise to 203 rupees," he added.
It must be noted that the notoriously low wages of tea workers in the country, except from creating and perpetuating severe poverty, have also contributed to the increase of child slavery, making the families an easy prey for traffickers and other criminals.