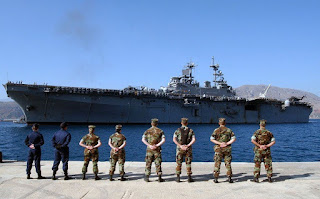 The attack from the side of the NATO soldiers, which is not the first one that takes place in the area, was unprovoked.


In a statement, the Chania Peace Committee strongly condemned the incident and said that the soldiers of NATO behave like they are in a "concquered city". Similar statements of condemnation were issued by the local KKE and KNE Party Organisations.

"The attack which resulted to the serious injury of a fellow citizen is not an isolated incident. The increased attacks by NATO soldiers go hand by hand with the deeper involvement (of the country) in the plans of NATO's alliance, the transformation of our city into a basement of peoples' murderers" wrote a statement by the Chania Organisation of the Communist Youth of Greece (KNE).

It must noted that the naval base of Souda (used by the US-NATO forces) is 6 km to the east of the city of Chania.

The above unprovoked attacked by NATO soldiers against civilians was brought in the form of a question to the Greek Parliament by the KKE MP Manolis Syntihakis. MP Syntihakis submitted a written question to the Minister of Defense asking from the government to take measures for the punishment of the perpetrators, refering also to the popular demand for the closure of the foreign military bases.