For the preparation of the Congress, local peace committees across the country held meetings, discussed and organised the future activities of the antiimperialist movement.


The EEDYE fights against the installation and operation of foreign military bases in the country, demanding all the NATO-EU bases, corps and military facilities of imperialists in Greece to shut down. EEDYE has underlined the dangerous role of the US-NATO military base in Souda, Crete, as well as the possible transference of nuclear weapons to the Air base of Araksos in Peloponnese.

Regarding the base in Souda, EEDYE has mentioned that "the base has fulfilled and fulfills a special mission to the imperialist wars in Yugoslavia, Afghanistan, Syria, Libya, in the recent US missile attack against the Syrian people. The US-NATO staff has congratulated the governments of ND and PASOK, the SYRIZA-ANEL government on their anti-people's deicisions and has states that this base is a determinant factor in the preparation and conduct of imperialist wars".

The Greek Committee for International Detente and Peace, founded in 1955, is moving towards her 18th Congress with the slogans for the "Strengthening of the antiimperialist struggle against US-NATO-EU", the "strengthening of the efforts to close the base of Souda and all foreign bases in Greece" as well as the "disengagement of the country from NATO and the EU, with the people being masters in their homeland".

Below, you can read a leaflet of EEDYE, presenting a map of Greece with NATO & EU bases, corps and military facilities. 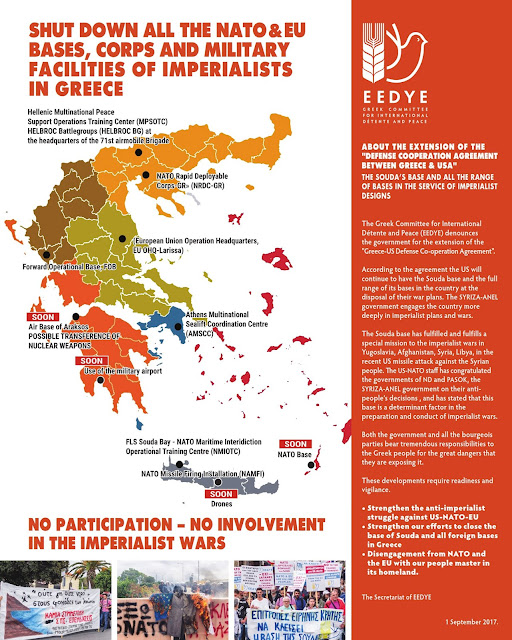