Tripartite Summit of Greece-Cyprus-Israel: Who will be benefited from this "strategic partnership"? 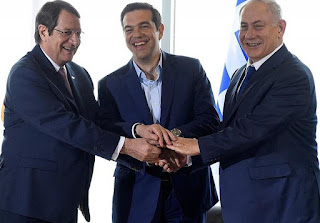 Another link in the chain of plans and antagonisms that are dangerous for the peoples
On 15/6 the 3rd Greece-Israel High Level Cooperation Council and the Tripartite Summit of Greece-Cyprus-Israel were held in Thessaloniki with the participation of the Prime Ministers A. Tsipras and B. Netanyahu and the Cypriot President N. Anastasiades.
The discussions and decisions taken there reflect the government's goal regarding the geo-strategic enhancement of local business groups, the interconnection of capital from the three countries and the expansion of their joint business activity, mainly regarding energy resources and transport routes.


This effort is unfolding in the context of the sharpening antagonisms of the imperialist centers and countries in the Eastern Mediterranean, specifically over the control of the natural resources and transport routes, with enormous dangers for the peoples of the region.

A. Tsipras focused on the "strategic relationship", as he characterized it, between the three countries, as well as on their plans for "stability and security" in the region, which is a necessary precondition for their next goal, which he described as "support for entrepreneurship".

He also made reference to "energy cooperation", which is based on the "geopolitical position of the 3 countries" at an important crossroads and on or close to energy deposits, serving the strategy of the bourgeois class by making the country an "energy hub".In any case, he noted that this goal contributes to the implementation of the EU strategy concerning the diversification of its energy sources and supplies so that it can basically reduce its dependence on Russian fuel. In this framework, A. Tsipras referred to the Greece-Cyprus-Israel cable and "East Med" pipeline (which via Cyprus and Greece transports energy from the Eastern Mediterranean to the EU), as well to the development of renewable energy resources.

"There were also discussions at our table about the developments in the wider region, the Syrian and Cyprus issues." added A. Tsipras, while in his reference to the Palestine issue he made a point of recognizing the "right of the Israeli people to live in security", the pretext used by the state of Israel to carry out crimes against the Palestinian people on a daily basis.
The Israeli Energy Minister welcomed the participation of Greek companies in the sector of hydrocarbon utilization in the regions of Karich and Tanin. He called on them to strengthen their role in the utilization of Israeli natural gas deposits and underscored the impetus their increased role could lend to the EastMed pipeline plans.
A number of agreements were advanced in these meetings regarding cooperation with Israel in various industrial sectors, while in terms of military cooperation, even if it was not on the agenda of the meetings, the following was stressed "that it exists and is expressed both by the cooperation between the military industries of the two countries, as well as by their joint exercises and training."

The newspaper 'Rizospastis", organ of the CC of the KKE, characterized the Tripartite Summit as being "another link in the chain of plans and antagonisms that are dangerous for the peoples." 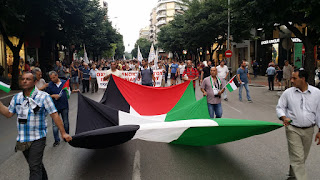 On the evening of 15/6 the working people and youth of Thessaloniki through their mass participation in the rally and march organized by the Committee for International Peace and Detente of Thessaloniki demonstrated their opposition to our country's involvement in the imperialist plans, which accompany the antagonisms of the monopolies, in whose framework the Tripartite Summit of the Prime ministers of Greece-Cyprus-Israel is integrated.
The demonstration also sent the message that the peoples are united in their common interest to fight for a life without exploitation and poverty, without bosses, for a situation where they will enjoy the wealth they produce.
The demonstrators also denounced the presence of the Israeli Prime minister in Thessaloniki as a provocation to the pro-peace and anti-war feelings of the people, as he bears responsibilities for the criminal attacks against the peoples of the region and chiefly against the sorely tested Palestinian people.