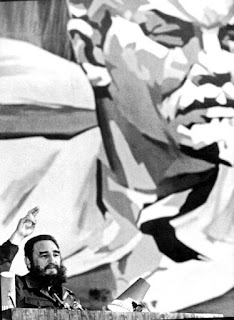 ‘The 20th century is over now’ was the headline of Hurriyet after the death of Fidel Castro. This journal had stirred in me a particular feeling of disgust since my early youth; it is a kind of official journal, the strong voice of the dominant ideology, always great and wealthy, and steadyingly the flagship of the fight against communism.

Hurriyet, independent from its owner, is the representative of the intelligence, for whatever remains in the idiocratic system to be called so, of the capitalist class.

The headline of ‘the 20th century is over now’, without doubt, should be considered as a hideous ideological assault, including the intimidation of ‘now you’re screwed’, against those who cannot accept today’s world. However, this inferiority, this respectlessnes does not annihilate the intelligence inherent in the headline.


‘The 20th century is over now’ reveals the doctrine of the international reactionism that marked the last four decades. Wiping out the century with all its consequences was the fundamental motto of the monopolies since 1980s; they’ve never abandoned it.

What was so special with the 20th century?

The 20th century did not only consist of the two massive wars that the imperialism deemed proper to the humanity and the sanguinary dictatorships. There was the Socialist October Revolution of 1917, there were independence movements that did not need US or EU flags or protectorate, which turned their faces to left, there was an immense resistance against obscurantism and tyranny, there were wide areas in which the principle imperialist countries did not rule the roost, there were struggle, creativity, hope and determination of the great humanity.

Hurriyet is the journal of a mentality that detests all these. It is an operation center that is intimate with headquarters that deplores saying ‘We brought everyone to knees, except Cuba.’ It is quite normal that they give such reactions to the death of Castro, because they are right up to an extent. Fidel was a legendary the leader of a people who brought them down a peg or two.
The leader took leave by saying ‘My people does not need legends’, but the socialist Cuba is over there. In this respect the headline of Hurriyet is also a declaration of war: Continuing devastation until annihilating all the consequences and traces of the 20th century!

You fools! It is your system that is being devastated.

You could not get rid of crises, wars and irremediableness in a period in which the working class retreated the most at the international scale, which has an influential struggle history for more than one and a half century, that is to say, in a period which did not actually threaten your vile system.

That the 20th century had been over…

The history will, of course, flow forward; there is no way back but the traces, consequences, and lessons of the leaps forward of the humanity in the past cannot be annihilated.

Since they want to close down the case of the 20th century as soon as possible, there is ever so much there. We will analyze that in this respect and when the 20th century comes back once again under different conditions, we will study well our lesson in order not to do errors.

What can be immediately said?

The revolutions are not tactical but strategic processes. A strategy that is not revolutionary, cannot take root even though it evolves into a revolutionary tactic during an instant of crisis. The success of the Bolsheviks in 1917, its background aside, is the product of the strategic approach that Lenin had insistently developed since 1915. It has been understood that in order to bring a revolutionary strategy to maturity, not strength but the will for strengthening is necessary.

At the weak periods of the 20th century working class movement, there are numerous examples when revolutionary strategies were thrown away for more ‘realistic’ strategies. As I stated, in 1915 the political balance of powers were not in favor of Bolsheviks; on the contrary, if one were ‘wise’, he would have to accommodate himself to circumstances.

The fundamental reason behind the defeat of the German Revolution in 1921, 1923 and 1924 was that a political subject that tenaciously developed a revolutionary strategy in 1915 or before had not emerged. When the politics started to boil, when the most revolutionary, the most developed elements of the working class movement took a ‘revolutionary’ stance, they looked askew. They could not.

In the aftermath, for example in 1934, 1936, 1945, 1974, for numerous times, historical junctions appeared. In several places in Europe, the fundamentals of the capitalism were cracking; the communist movement had not even tried to place a revolutionary tactic onto a non-revolutionary strategy. It was stated that the balance of powers was to the detriment of the working class, however, in some examples this was questionable. Some justifications can, without doubt, be put forward to say that the conditions were unfavorable for the power of the working class in the Austria of 1934, the France of 1936, the Italy and the France of 1945; however, the contrary is also valid. In these periods, a revolutionary subject could well have overthrown the capitalist system.

Such strategy did not exist.

A revolutionary strategy is not a set of foolish moves, quest for adventure or fetishizing ‘radical’ methods of struggle. Starting from this point of view, in the Vienna of 1934, in the France and the Italy of 1945, there were ‘revolutionary’ working class movements. Republikanischer Schutzbund was the self-armed force of the working class in Austria, police was not strong enough; military forces that attacked with heavy armor could barely capture working class neighborhoods. The social democrat workers were struggling against fascism, the social democrat party leadership was inviting them ‘to show firmness’, as for revolutionary communists, they were so weak.

At the end of the war, in Italy and in France, the communists were the major, the most prestigious, the most organized power and they were completely armed. The conditions were ineligible, really?

What was missing was a revolutionary strategy rooted in the past and reaching the present. Saying ‘Now is the time to be revolutionary’, it doesn’t work that way; it is not possible to transform into a revolutionary force after being part of any kind of unprincipled politics in order to strengthen and change the balances. Because, even though you go through a ‘revolutionary’ transformation in your mind, the social segments that you appealed cannot keep pace with it, the bourgeois relations in your saddlebag threaten you, you cannot look forward while trying not to loose them.

All these are present in the history of the 20th century.

We always talk about the betrayal of the social democracy. Ok, but it just took place once. The social democratic parties transformed from working class to bourgeois parties at the beginning of the 20th century.  The betrayal is there. There is no betrayal in 1934, 1936, and 1945.

The betrayal over there (if you want let’s not call it betrayal, the mistake) should be sought in the behavior of those who think that they can change the balances in favor of the working class by collaborating with social democrats.

Are the conditions ineligible? Ok then; do not embark on an adventure, hold firmly, do not let the bourgeoisie off the hook, do not be a part of bourgeoisie governments, strengthen the independent line of the working class, stamp out any kind of dreams and illusions about the capitalist system. Wait until the conditions become more eligible, more precisely, do not wait for it but help it be so.
There are several lessons.

If we do not study our lesson well, Hurriyet will caption even more headlines and get on our nerves.

At least we should know that they are so angry! All of them. As I said, they are in such a mood in their best years. They know that once the humanity comes across the moments of 1934, 1936, 1945, 1974; they know that there will not be anyone who talks about ‘ineligible conditions’.

He had studied his lesson well; he gave the lesson of their lives to tyrants, exploiters…

Everyone knows that, at the beginning, Fidel was not a communist, that he did not target a socialist revolution. But they think that Fidel was soooo ‘large’.

Fidel, along with Lenin, is a genius of alliances in the 20th century. Both of them were great revolutionaries and they never connected their own revolutionary strategies with other projects, in this sense, they always put their political movements into center. Fidel, since the beginning, never saw himself as a part of chains of alliances. His allies, even at his ‘weakest’ moment, were the ones who accepted Fidel and the will of the 26th of July Movement.

Hurriyet did not caption that headline for nothing…

The 20th century was not for nothing. You will see.

* First Secretary of the CC of the Communist Party, Turkey (KP), soL columnist.