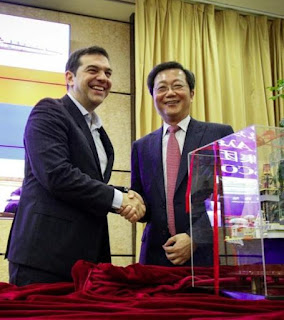 According to Greek media, Lirong asked from Tsipras to take any possible measure for the restriction of the strikes in Piraeus Port! Seems that 'Cosco' isn't pleased enough with the galley working conditions that exist in Greece's largest port and wants to extend the exploitation against dockworkers. Of course, this demand by 'Cosco' goes along the upcoming 2nd evaluation of the bailout agreement which includes new barbaric anti-workers laws, restriction of strikes, etc.

In his role as a mediator between large Greek businesses and Chinese monopoly groups, Alexis Tripras met with the bosses of several chinese companies, including 'Alibaba Group' e-commerce firm, the 'ZTE' telecommunications equipment and systems company, the 'Fosun International' investment company and other chinese businessmen. The major issue in these meetings was the extention of Chinese investments in Greece and the EU.