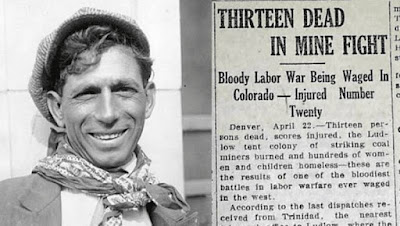 Louis Tikas, born Elias Anastasiou Spantidakis in 1886 in Loutra, Crete, had been a prominent labor union organizer of the Ludlow camp during the 14-month coal miners strike in southern Colorado. Since 1912, Tikas had been an organizer for the United Mine Workers of America.
Read more »

"Ludlow, Greek Americans in the Colorado coal war" - A documentary by Leonidas Vardaros

The trailer of the film.

It's title is "Ludlow, Greek Americans in the Colorado coal war". The documentary by Leonidas Vardaros made it's premiere on April 6, at Alkionis Theater in Athens. The documentary, which received an award at the 18th Thessaloniki Documentary Festival, narrates the history of the 1913-14 clash between the United Mine Workers of America and the Coal companies under the leadership of John D.Rockefeller. The workers' descendants remind their fathers and grandfathers' struggle and the injustice they faced.

The class-struggle of 1913-14 led to the Ludlow massacre, on April 20, 1914 the cold-blooded murder of women and children and the assassination of three unionists, among them the leader of the Greek strikers Louis Tikas.