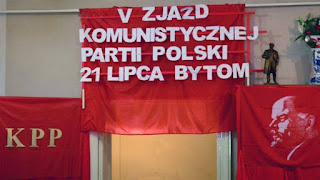 On 21st of July, the day before the 75th anniversary of establishment of the Peoples’ Poland, the 5th Congress of the Communist Party of Poland was held in Bytom. It was attended by several dozen delegates of the regional structures of the Party and representative of the Communist Party of Greece, member of the European Parliament – Lefteris Nikolaou. Several other foreign parties i.a. from Italy, Spain, Portugal, France, Denmark, Norway, Czech Republic and Lithuania, sent their letters for the Congress.
The congress was held in a difficult period for the Party, when repressions and persecution against the communists continue. The trial of the CPP members and editorial staff of the “Brzask” newspaper entered a new stage – the District Court in Katowice sustained the prosecutor’s demand to renew the trial and decided to return the case to the first instance court. The campaign of falsifying history, eliminating from the public space, education and consciousness of the citizens anything positively associated with the People’s Poland, liberation of Poland by the Red Army and the Polish Peoples’ Army and revolutionary traditions of the workers’ movement, conducted by the authorities is strengthening. We may expect that repressions by the state authorities will increase even more, what is forecasted by the sharpening of the article 256 of the penal law, penalising promotion of the communist ideology, use of the communist symbols and equating communism with fascism. In this situation the Congress unanimously decided that the party cannot perform self-censorship or modify its statute and other programme documents, by resigning from its Marxist-Leninist ideology.


The Congress announced continuation of the previous political line of the Party and struggle against the repressions by the authorities. Delegates accepted the report on the domestic and international activities of the Party in recent 4 years, and gave vote of acceptance to the current leadership. Krzysztof Szwej was re-elected for the next term the chairman of the CC of the CPP. 7 members of the CC and other organs of the Party were also elected.

In the statement of the Congress the Party announced that present international situation is a threat to international peace, especially through „growing threat of the serious military conflict as a result of threats towards Iran”. Poland, “together with countries such as Ukraine, Lithuania, Latvia and Estonia, is transformed into the infrastructure of the Eastern flank of NATO”. Party also noted that “Until now any opposition towards the main directions of the government’s policy was efficiently removed from the public life and marginalised.” “Everyone questioning policy of the government, especially in the foreign relations, is being not only eliminated from the media but also openly persecuted”. Party underlined that independence of courts in Poland “was seriously undermined”.
The Congress condemned the practice of the court-prosecutor's persecution of the CPP and „the long-standing trial aimed not only at repressing members of our party, but also intimidating the public opinion”. Delegates also discussed the future activities, especially the widening of the information campaign of the CPP in the internet, increasing publishing frequency of the „Brzask” newspaper and other ways to promote the communist ideas.
Solidnet.