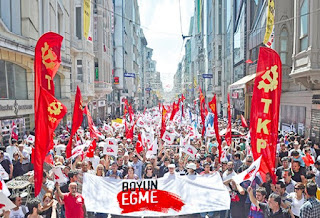 ISTANBUL/ANKARA- The Communist Party of Turkey (TKP) released a statement denouncing the hypocritic attitude of the ruling party of AKP on the referendum to be held in spring 2017.

On 26th January, four days after the Communist Party of Turkey (TKP) has formally declared to be returning back to the political arena, 42 members of TKP were taken into custody in Ankara, Çanakkale and Adana while distributing a statement titled ‘Enough’ against the presidency system imposed by the ruling Justice and Development Party (AKP), The TKP made a statement denouncing the hypocritic attitude of the ruling party of AKP on the referendum to be held in spring 2017.

In its statement titled as, ‘How will this referendum be held?’, TKP indicated that the country is stuck amid the caprices of a gambling despot of whom the political career is finished and underlined that they will not be settling only with campaigning against the presidential system but they will be calling the working class for organized struggle.
TKP also stated that AKP is hiding behind the mask of ‘popular will, elections and referendum’ while is choking any of the opposed opinions. The inevitable result of this attitude, according to TKP, is distrusting and delegitimizing the electoral result. TKP once again declared to continue to the firm struggle in the interest of the working class in Turkey.
The complete statement is as follows:

How will this referendum be held?

In the last two days more than 40 members of the Communist Party of Turkey (TKP) were detained during the campaign for rejecting the presidential system at the referendum which will be held on in Spring 2017. The attitude of the AKP government alleging to be giving the choice on the one hand and on the other, choking the rest alternatives, has no result other than increasing the distrust and delegitimizing the electoral result. But, it cannot change our firm attitude on our campaign for ‘NO’.

Turkey seems to be entering a referendum process, being stuck amid the caprices of a dangerously gambling despot of whom the dead political career is trying to be knit together with the destiny of the country, and the ‘cute’ opposition of the system on which the imperialists will finally decide to gamble on.

That is why we do not settle with only saying 'NO’, but at the same time we are calling the working class for organized struggle.

In Ankara 26, Çanakkale 10, Adana 6 and in the sum 42 of our comrades were detained under illegal ways while distributing the declaration on the referendum that will be held on the presidential system.

If you do not want any campaign to be conducted against the referendum,tell it openly and put only the choice for ‘yes’ in the ballot box.

But then, you should bear all the results!

Holding a referendum and not letting anyone else to speak is a deception...

The attitude of AKP speaking on the one hand about popular will, elections and referendum and on the other choking any of the opposed opinions does not lead to any other result other than increasing the distrust and delegitimizing the electoral result. But, it cannot change our firm attitude on our campaign for ‘no’.

TKP, in its firm struggle shall not step back but, like until now, shall continue to be the voice of the working class of Turkey.

* * *
KKE: COMMENT ON THE SUPREME COURT'S DECISION TO BLOCK THE EXTRADITION OF THE EIGHT TURKISH "COUP SUSPECTS".
Source: Rizospastis.

ATHENS- Regarding the decision of Greece's Supreme Court (Arios Pagos) to deny the extradition of the 8 Turkish military officers who fled to Greece after Juy's failed coup in Turkey, the Press Office of the CC of the Communist Party of Greece (KKE) made the following comment:

"The decision of the Suprepe Court correctly takes into consideration the safety framework of the Turkish officers who apply for asylum. From the very first time, the KKE supported that the legislation which guarantees the rights of those who apply for asylum must be respected".

CARACAS- Venezuela's President Nicolas Maduro announced on January 19 that the Great Housing Mission Venezuela (GMVV, Spanish acronym) had reached the goal of delivering 1,400,000 homes throughout the country.
"Today we reach an incredible goal, after so much war: 1,400,000 homes built and delivered to our people. Let's continue winning," Maduro posted to his Twitter account.
In another message, he said that despite the economic war and the drop of over 70% in crude oil prices, the Bolivarian Revolution has not stopped investing in social care policies.
"In 2016, foreign exchange earnings fell by 87% and we built twice as many new homes for our people. Doing more with less. (We are) succeeding " he said.
Since April 2011, the GMVV has changed the lives of almost 1.4 million families, who have claimed their right to a decent, safe and comfortable home that gives them the opportunity to access essential basic services and a more humane habitat.
The construction of these homes has meant a great national effort and the first of this size undertaken in Venezuela, through a socialist vision, in which housing is no longer conceived as a commodity but as a result of a joint work.
This effort included a national registration, granting of land, materials, machinery, supplies and financing for construction, as well as the active participation of the people, which has been responsible for raising 60% of town planning.
The construction of the new homes was achieved in spite of the constant national and international economic attacks aimed at putting an end to the social achievements won by the Venezuelan popular classes in the last 16 years, as well as the 60% slump in crude oil prices since mid-2014.

MEXICO CITY- Mexican President Enrique Peña Nieto has canceled a meeting with President Trump that was scheduled for next week, as tensions between the two countries rise. The move came after Trump announced plans Wednesday to expand the border wall between the U.S. and Mexico—a wall Trump has repeatedly said he would force Mexico to pay for. On Thursday, Mexico’s top diplomat was at the White House to help pave the way for the visit, when his team received word of a Trump tweet suggesting that if Mexico were not willing to pay for the wall, it should cancel the trip. Trump claims the two leaders mutually canceled the upcoming meeting, a statement Peña Nieto has refuted.

Vicente Fox: "It is stupid. It is crazy. Imagine him going to Congress and saying to the American Congress to authorize a budget, to lend money to build a useless wall, a wall that is a complete waste of money and which is useless. And he tells Congress not to worry: 'I will get Mexico to replace the money. Mexico will pay for it.' Well, Trump, here you go."

On Thursday, White House Press Secretary Sean Spicer said the U.S. would impose a 20 percent tax on all goods imported from Mexico and use the proceeds to pay for the expanded border wall. But after widespread outrage at the plan, Spicer walked back his statements only hours later, saying the import tax was just "one idea." We’ll go to Mexico City for more on the U.S.-Mexico standoff later in the broadcast.