Event in Brussels: People's housing, a "green" highly expensive commodity in the EU and capitalism 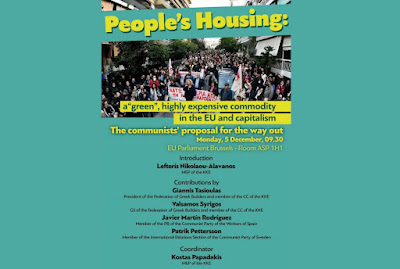 Event titled "People's housing: A "green" highly expensive commodity in the EU and capitalism. The communists proposal for the way out" is organized by the Europarliament Group of the Communist Party of Greece (KKE) on Monday 5 December, 9:30 am, at the European Parliament (Room ASP1H1) in Brussels.

The introductory speech will be delivered by the KKE MEP Lefteris Nikolaou-Alavanos.

Contributions will be made by:

Kostas Papadakis, KKE MEP will be the coordinator of the event.