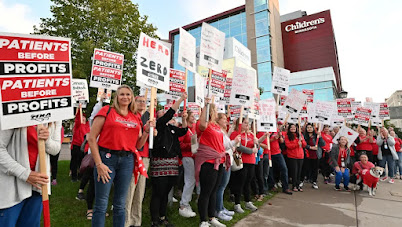 Holding signs bearing messages such as "Patients Before Profits," employees gathered in groups in the early morning hours to protest outside some of the 16 affected hospitals, according to photographs the union posted online.

"Right now in Minnesota, nurses are overworked, hospitals are understaffed, and patients are overcharged," the Minnesota Nurses Association (MNA) said in a statement.

The All-Workers Militant Front (PAME) that represents the class unions of Greece, expresses its solidarity with the strike of thousands of nurses in Minnesota and Wisconsin in the USA who are demanding 27% wage increases.

Health workers both before and during the pandemic have been on the front line of protecting the lives and health of the people. But governments and business groups that treat health as a commodity on the one hand treat the sick as customers who must pay to get well and on the other exploit health workers with intensification and low wages.

In conditions of exploding costs of living, workers cannot live with increases that do not meet their real needs. The struggles and mobilizations that are developing in many countries around the world show that workers with organized and collective struggle and with the power of solidarity can win, can overturn anti-workers’ plans and impose their just demands.

PAME supports the just demands of the Minnesota and Wisconsin nurses and expresses solidarity with their strike.