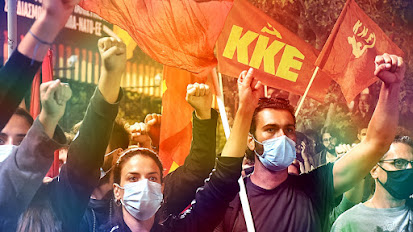 Under the slogan “The new generation with KKE for the big, the beautiful, the sensational” (N. Beloyannis)- Socialism, the answer in the 21st century”, the central events of the 48th festival of the Communist Youth of Greece, commonly known as KNE-Odigitis Festival, will take place on 22-24 September in Athens. This year's slogan is inspired by Greek communist hero, Nikos Beloyannis, on the occasion of the 70th anniversary of his execution.

The festival, which is traveling in many Greek cities and towns throughout July and August, includes numerous political as well as cultural events.
The festivities will culminate on 22, 23 and 24th of September at Athens' Tritsis Park. The General Secretary of the CC of the KKE Dimitris Koutsoumbas and the Secretary of KNE Nikos Abatielos will be the speakers at the major political event that is due to be held on Saturday 24 September.

More than 70 popular artists, including legendary singers Maria Farantouri and George Dalaras, are going to participate in the Festival.

Being one of the country's most significant annual cultural events, the KNE-Odigitis festival, organized by the Communist Youth of Greece, spans a history of 48 years. The 1st festival of KNE and her newspaper "Odigitis" took place on September 1975, just months after the collapse of the 7-year old military dictatorship.