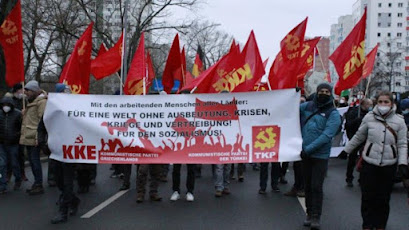 According to the organizers of the rally, despite the freezing temperatures and the pandemic-related restriction measures more than 7,000 people marched in the streets in order to honor the two communist revolutionaries who were murdered on January 15th, 1919 by  paramilitary troops of the social democratic government and the German bourgeoisie shortly after the violent suppression of the Berlin workers' revolution.
The rally began from the Frankfurter Tor in Berlin and, after an hour, it reached Friedrichsfelde cemetery where the demonstrators laid wreaths and carnations in front of the large memorial stone which bears the words “Die Toten mahnen uns” (The dead remind us).