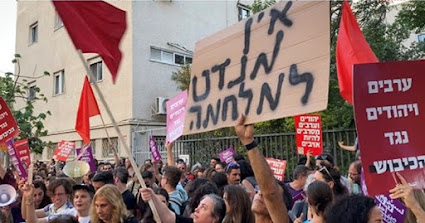 In a desperate attempt to maintain power, Netanyahu is dragging us into a dangerous war that will wreak havoc on the two peoples. War will only bring more killing, suffering and pain. We demand an end to the escalation. We demand an end to the fire. We demand the only solution to the situation. The end of the occupation, the end of the siege of Gaza and the establishment of a Palestinian state alongside Israel, whose capital is East Jerusalem".

"We are concerned about the deterioration of the situation and the escalation into violence. We oppose any harm to innocent civilians and call for them to be kept out of the cycle of violence and hostility. We warned again and again that Netanyahu would set fire to the area in order to maintain his rule, and here it happened. We support and encourage demonstrations, and believe in the basic right to protest", reads the Hadash statement.