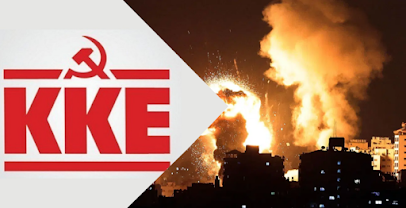 This is the message of the KKE to the people of Palestine who is currently being challenged by the airstrikes of the murderous state of Israel, under the tolerance of the USA and the EU. Israeli aggression intensified after the U.S. decision to recognize Jerusalem as the capital of Israel. Bombings and dozens of victims, including children, are now added to the blockade and Israeli settlements that the Palestinians have experienced for years.

We call, here an now, the Greek government to stop the dangerous policy of the “upgraded” military cooperation with Israel, which has been pursued by all successive governments. This policy provides an alibi for crimes against an entire people who claim their basic rights in face of Israel's dangerous policy of annexing Palestinian territories to the West Bank and continuing occupation of Palestinian territories.

The recognition of the Palestinian state by Greece must proceed immediately, utilizing the unanimous decision of the Parliament in 2015".

"The KKE condemns the Israeli state's slaughter targeting the Palestinian people, that we are seeing happen these days in Jerusalem and the Gaza Strip", the Communist Party Political Bureau member Giorgos Marinos said earlier today after a meeting with Foreign Minister Nikos Dendias in Athens.

"The responsibilities are criminal and the Americans, the European Union, but also all the Greek governments, which are upgrading military, political and economic relations with the occupying state of Israel, bear great responsibility," Marinos said.

Marinos stressed KKE's concern over developments in Greece's region and that the party "considers the policy of involvement pursued by the New Democracy government, like the previous governments of PASOK and SYRIZA, in the plans of the Americans, NATO and the EU is extremely dangerous for our people and their interests, but also for the neighboring peoples. Our party condemns and opposes this policy of involvement."