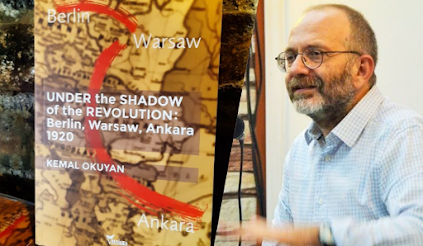 Originally published in Turkish in 2019, this work does not only analyzes the achievements but also the shortcomings of the communist movement during the rise of the revolutionary wave in the early 20th century.
Kemal Okuyan visits three cities, upon which the shadow of the revolution was cast in order to understand and drive lessons, going back to the year 1920.

Nevzat Evrim Önal, a member of TKP, translated the book into English in a short time, making the English translation of the book available for international readers.

You can find the preface to the English edition by Kemal Okuyan below.

Under the Shadow of the Revolution: Berlin, Warsaw, Ankara 1920

Preface to the English Edition

The fate of the whole 20th century was decided upon between 1917 and 1923. The greatest leap towards the world that humanity longs for, a world without classes and exploitation, was made in this period. The October Revolution was an unparalleled achievement of humanity. However, the same years also bore witness to great disappointments, which had historical impacts on the process of world revolution.

It is without a doubt that the defeats suffered by world communist movement, or its shortcomings, between 1917 and 1923 have a bearing –even though an indirect one– on the gradual decline of the Union of Soviet Socialist Republics, which had been the most concrete achievement of the socialist revolution in Russia, to a point where it was no longer able to defend itself, and its eventual collapse.

The difficulties that would face a socialist foundation process confined to a single country, even one with a massive amount of resources, should be obvious. The resolution of Lenin, and Stalin after him, in facing these difficulties and directing the toiling classes of the Soviet Union towards the goal of constructing the socialist order, apart from being an immense success, also meant embracing the only revolutionary alternative as the revolutionary wave had started to recede.

If one has to give an exact date for the withering away of the revolutionary wave, one must mark the year 1920. This was the year in which capitalism was finally able to pull the reins on the crisis in main countries and deliver staggering blows to the revolutionary front in the course of relentless class struggles. It was without a doubt that the revolutionary situation was still making itself felt, but the optimism of 1917 and 1918 had been replaced with a cautious anticipation. And, it was also without doubt that all eyes were on Germany, where the flame of the revolution began to rise by the middle of 1918 and sputtered out as 1923 came to a close.

We have to discuss Germany of that period further. Just as we have to evaluate the historical confrontation between the revolution and counter-revolution on the stage provided by the Warsaw of 1920 further. Just as we have to investigate the struggle of the eastern peoples for national liberation that conduced to a great congress at Baku, and the war in Anatolia, which was the critical front of that struggle, further.

And, we have to be courageous in doing all these. There is no reason for the communists to shy from truths. Our mistakes and shortcomings are an inseparable part of our glorious history. They would become a weapon in the hands of our enemies if we fear them and think that we can erase them from history. Moreover, this courage is also what we need to save ourselves from repetition, mechanical interpretation of history and theoretical sterility.

The foundations of Marxism-Leninism, which are never outdated, are our only compass in investigating historical events, and the source of courage we need. If this book, which I wrote with confidence in this source, makes a contribution to our evaluations of the period I mentioned, I would be more than happy.

With feelings of respect and gratitude to the militant communists of a  century ago….