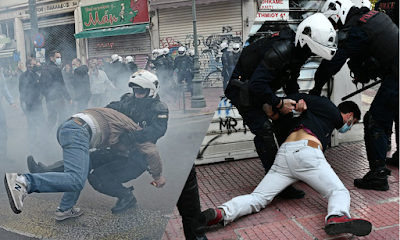 The violent attack of riot police against the demonstration bears the signature of the right-wing government of New Democracy (ND), of Prime Minister Mitsotakis and Minister Chrisochoidis.

The KKE's parliamentary representative, MP Thanasis Pafilis proceeded to an intervention to the Ministry, denouncing the authoritarian attitude of the government and demanded the release of the arrested protestors.

Despite the despicable decision of the government to ban all public gatherings, under the pretext of Covid-19, the Communist Party honored the Polytechnic Uprising with a march in the center of Athens, observing all the necessary protection measures.

At noon of November 17 in Athens, protesters with KKE banners and flags were able to defy the authoritarian and anti-democratic decision of the government, carrying out a march that reached outside the US embassy, which was surrounded by police buses and strong riot police forces.

The GS  of the CC of the KKE, Dimitris Koutsoumbas, was greeted with applause by the protesters and laid a wreath at the place where the police tortured militants during the military dictatorship. In his statement, D. Koutsoumbas noted the following:

"The messages of the Polytechnic uprising are timely. The slogans "USA out", "NATO out", "Bread, education, freedom, work, and health", continue to deeply move the Greek youth and the Greek people, who are struggling today and every day against an ongoing anti-popular policy. It is unacceptable to use the pretext of the pandemic to take reactionary anti-popular measures to ban the commemoration events of the Polytechnic uprising with the symbolic character that they have this year. The decision of the Greek police following the order of the government, to ban any gathering of more than 3 people, especially today, is unacceptable, anti-democratic, unconstitutional, and denounced by the entire political spectrum of the country. Even ND and KINAL supporters -with the latest  having not signed the joint text-denunciation of this criminal, unacceptable and dangerous decision of Mr. Chrysochoidis- denounce this ban. The Greek people, regardless of the insecurity that is cultivated under the responsibility of the government, as it did not take all the necessary measures during these years, are on the side of those who wholeheartedly fight on the path of struggle, in the streets of Athens, in the streets all over Greece. That is why the Polytechnic uprising will live forever". 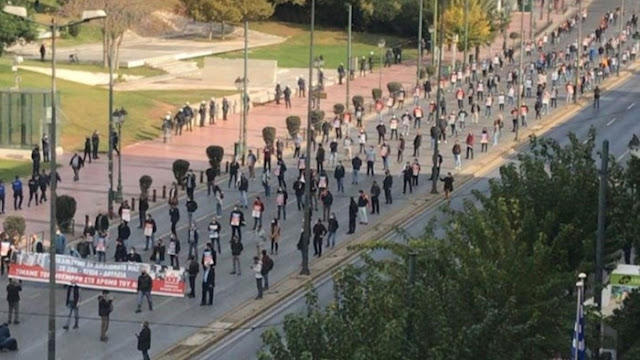 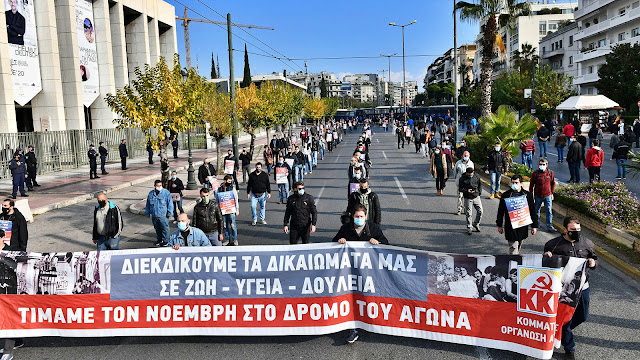 Asked by a journalist about the KKE demonstration outside the US embassy,  he replied:

"They are simply doing the self-evident. It is a symbolic gesture of young Greek people - as you can see, there is a specific number of attendees - against US imperialism, against what our country has suffered due to US and NATO policy".