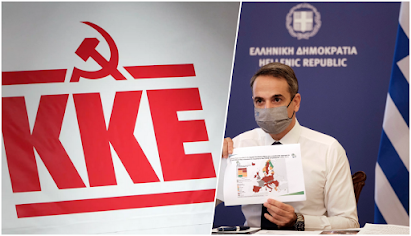 Since November 7th Greece has entered a second nationwide lockdown, following a decision by the conservative New Democracy (ND) government. The lockdown is accompanied by tough penalties for violations of the quarantine and non-observance of social distancing.

Alongside the lockdown, as the Communist Party of Greece (KKE) mentions, the government has committed crimes against the people's health and safety in order to serve the interests of the capital in a number of industry branches.

In a statement about Mitsotakis government's measures on Covid-19 pandemic, the General Secretary of the KKE Dimitris Koutsoumbas said the following:

"We are facing extraordinary and critical moments, in the face of the collapse of the public health system, with our cities being locked up again, with workers and self-employed on the edge of a precipice and above all with great losses in human lives.

Extraordinary conditions also require extraordinary measures. Measures that the government did not take when it should have, leaving the people and the country unprotected in the face of the expected second wave of the pandemic. Measures that have been repeatedly proposed by scientists, health professionals, trade unions, and other mass organizations that the KKE supported from the very first moment.

The government, instead of taking these measures, has committed crimes against our people. All this time it has exclusively been invoking individual responsibility. It put the so-called resilience of the economy first, which is nothing more than the demands and protocols of the capital in a number of industry branches, such as tourism.

Governments across the EU have done the same - regardless of political shade - while at the same time securing hundreds of billions for large business groups through the Recovery Fund. The result: Millions of victims, tragic, but also cynical dilemmas about who will live and who will die.

Moreover, the ND government saw the pandemic as a golden opportunity to implement new reactionary measures and to bring major reversals, with the aim of making the workers pay for the crisis once again.

These measures include 10-hour working days, unpaid overtime work, seizure of popular property, bans on marches and strikes, and a lot of anti-popular monstrosities, which here and now must be withdrawn and abolished.

The KKE's proposals for the necessary measures are concrete:

First, requisition of the private health and welfare sector to ensure the necessary ICUs, mass free diagnostic tests, and state monitoring in critical areas, such as nursing homes. But also to meet other existing needs and not to convert the public health system into a "one disease" system.

And when we say requisition, we mean the integration of the private sector in state planning and not the purchase of services, that is, feeding the owners of private clinics money, as other parties suggest.

In previous years, all governments closed down hospitals and about 10,000 hospital beds. These must be immediately reopened.

Second, mass recruitment of healthcare professionals, doctors, and nurses.
Third, effective protection measures in workplaces and schools, with 15 children per classroom, recruitment of teachers and provision of the equipment needed for distance learning during these weeks.

Fourth, relief of the congestion in the means of transport, by recruiting staff and requisitioning private buses, which are currently inactive. 2,000 tourist buses are rusting away, while they can be included in the central plan for the improvement of transport.

Fifth, no worker, unemployed, and self-employed, should be left without a decent income, because we are no longer in March, but in conditions where burdens and consequences of the previous period have accumulated.

The emergency allowance must apply to all unemployed people without conditions.

And it goes without saying that the new anti-labor monstrosity, which the government has already made public, must be withdrawn here and now.

The virus will be defeated at some point. At that moment, however, our people must be strong and robust. Because even then, they will have to face the impasses of a decayed system, which cannot guarantee even the basics: the right to health, that is, the right to life and work.

That is why the struggle for the immediate, absolutely necessary and self-evident demands must look ahead to the future, it must fight the root of evil and focus on the contemporary needs that can be met, based on the current achievements of science,  technology, and human labor, in the context of a radically different and new  organization of the society.

The Greek people may wear a protective mask, but they do not, nor will they, remain silent. They will impose a final "lockdown" in the anti-popular policy as a whole".