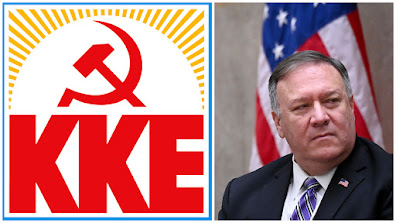 In face of Mike Pompeo’s visit, the Press Bureau of the CC of the Communist Party of Greece (KKE) issued a statement.

"The visit of the U.S. Secretary of State Mike Pompeo in Greece has two main objectives: First, to accelerate the dangerous arrangements in Eastern Mediterranean and the broader region with the sole criterion being NATO’s interests and the cohesion of its Southeastern wing, part of which is the joint exploitation between the bourgeois classes of Greece and Turkey, with serious consequences for our country’s sovereign rights. Second, to promote the U.S. geopolitical – economic and military – interests which pave the way only for the intensification of competitions and new military conflicts.

From this point of view, it is not a coincidence that this visit coincides with the resumption of exploratory contacts between Greece and Turkey.

These contacts, which take place under the high supervision of the USA-NATO-EU and were welcomed by the New Democracy (ND) government, SYRIZA and the other parties, in no way reverse the dangerous nature of developments in Eastern Mediterranean and the Aegean. They are fully integrated in the pursuit of strengthening NATO’s Southeastern wing and detaching Turkey from the Russian influence. As a result they pose new dangers for Greece’s sovereign rights, but also for those of Cyprus, and this is why they are accompanied by statements about “disputed waters” which throw water in the mill of Turkish aggression.

The political forces which cultivate false expectations ahead of Pompeo’s visit in Greece will be refuted once again, like they have been refuted so far with the myth that Greece’s further attachment to the US-NATO plans would shield its sovereign rights. After all, all this period during which the Greek-Turkish competitions are escalating, our country has been transformed into a vast US-NATO base, as a result of the strategic Agreement with the U.S, signed by the governments of ND and SYRIZA.

M.Pompeo comes to inspect the implementation of this Agreement, along with the promotion of the U.S. business interests (energy issues, Shipyards, new technologies, etc.) which have nothing to do with the interests of the Greek people.

The Greek people must not show any confidence to the choices of the government but also of the other bourgeois parties, which have deposited the (country’s) defense of sovereign rights, as well as the peace in the region, to NATO, the U.S. and the EU. On the contrary, they need to intensify their struggle for the disengagement of the country from imperialist plans and the disengagement from NATO and EU, which fuel dangerous developments in the Aegean and Eastern Mediterranean."