The iconic moment with the Soviet soldier in Reichstag mirrors not only the struggle of the Red Army and its leadership but overall the people of the Soviet Union. After all, it was the Soviet Union which, under the guidance of the Communist Party, with Joseph Stalin as its head, carried the main burden of the fight against the nazi-fascist imperialist Axis.

The numbers verify the colossal, incomparable to any other country, casulaties of the USSR in the war.

-The human cost was over 30,000,000 people, including those who were injured and disabled. More than 20,000,000 deaths, soldiers and people, including approximately 2,000,000 members of the Communist Party, who gave their lives for the protection of the socialist homeland and humanity.

The casualties of the United States and the Britain were 405,000 and 375,000 deaths respectively.

- Around 1,700 cities and 70,000 villages in Soviet Union were completely destroyed. Almost 32,000 factories and 65,000 kilometres of railway were totally or partially destroyed. Over 100,000 kolhozes, 5,000 sovhozes, thousands of hospitals, universities, schools and libraries were either destroyed or looted.

The triumph of 9th May 1945 was the outcome of a series of victories by the Red Army: Stalingrad, Kursk, Leningrad, Moscow, in the outskirts of Berlin and elsewhere. It is characteristic that in the Eastern Front, a total of 607 German divisions were either destroyed or captured; a number three to four times bigger than the casualties of the Nazis in the other Fronts (West Europe, North Africa, etc) combined.

In the victorious course of the men and women of the Soviet Union we can see an especially important aspect of the superiority of the socialist system, the advantages of the workers’ power, the central planning of economy and the social ownership of the centralized means of production. These factors played a crucial role in the timely preparation of the USSR’s defense system and the proper organization of the Red Army.

For many decades, especially after the counterrevolutionary events in the USSR and Eastern Europe in the beginning of the 1990s, there is an organized effort by imperialist centers to distort the history of the Second World War, to downgrade the Soviet contribution in the outcome of the war and, ultimately, to vilify socialism-communism.

This reactionary propaganda aims primarily to the younger generations which have no direct historical memory or knowledge for the facts.

The bourgeois historiography deliberately hides the imperialist character of the Second World War and the fact that it was “born” as a result of the competitions of the monopolies and their states for the re-sharing of the markets. The Second World War was the outcome of the deep political crisis caused by the capitalist economic crisis  during the interwar period.

They hide the fact that Fascism and Nazism were born out of the womb of the capitalist system and that they historically consist bourgeois types of governance. Large european and U.S. monopoly groups were the ones which funded Hitler’s Germany, thus contributing to the rampant growth of the Nazi military machine.

The propaganda of the imperialists tries to obfuscate the fact that the Soviet Union was actually forced to participate in a war which it didn’t want and had no interest from it. The capitalist forces which participated in WW2, both the “democratic” ones (U.S, Britain) and the “nazi-fascists” (Germany, Italy), had indeed their own competitions but they also had a common aim: the destruction of the first socialist state in the world, the Soviet Union.

While, for example, they spread likes about the Molotov-Ribbentrop non-aggression Pact, they rarely refer to the 1938 Munich Conference between Nazi Germany, Musolini's Italy, Britain and France.

The bourgeois disinformation constantly vilifies the Soviet Union, blames Stalin for crimes he never committed, but deliberately conceals that crimes against humanity weren’t only committed by the Nazis, but also by the governments of the “democratic” capitalist states. However, it was the U.S. government, under President Harry Truman, which committed the most atrocious crime of the 20th century; the nuclear holocausts in Hiroshima and Nagasaki (6 and 9 August 1945). War criminal Truman ordered the use of the atomic bombs at a time when Japan was completely isolated and had no other option but to surrender.

The actual reason behind this horrific U.S. crime was to send a message of intimidation to the Soviet Union and the socialist camp. Also, the bombing of Dresden by the U.S and British air forces on February 1945, which resulted to 120,000 deaths, had no military significance for the outcome of the war.

The dirty role of the EU 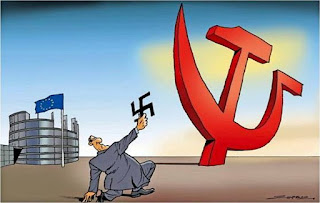 The European Union has played a leading role in the distortion of the history of the Second World War and the vilification of the Soviet Union. A series of decisions, declarations, policies and actions proves that anti-communism has been one of the EU’s foundation stones.

Apart from the numerous anti-communist memorandums and resolutions adopted by EU institutions, the Union has established the 9th of May as “Europe Day” in an attempt to distort the historical meaning of the anniversary. The anti-communist hysteria has led the EU to proclaim the 23rd of August as the “European Day of Remembrance for Victims of Stalinism and Nazism”; an utterly despicable and anti-historical attempt to equate communism with nazism.

At the same time, in the Baltic countries, as well as in Ukraine, the EU sponsors the historical rehabilitation of fascists and WW2 Nazi collaborators, labeling them as “fighters of democracy” because they fought against the Red Army. In EU member-states, far-right governments have unleashed persecutions against the local Communist Parties (Poland), remove or even destroy monuments of the socialist era (e.g. Poland, Czech Republic), legislate the banning of communist symbols, etc.

History does not change

The truth is one and does not change: Without the immense, crucial contribution of the Soviet Union and the local anti-fascist partisan movements, Europe wouldn’t have been liberated from the Nazi yoke. Without the victories of the heroic Red Army in the Eastern Front, the barbarism of Nazism and Fascism would have covered Europe. 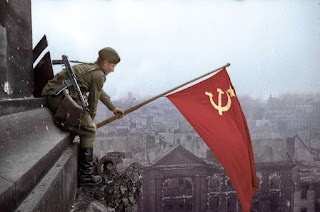 On the 75th anniversary of the Great Antifascist Victory, we honor the great heroes, men and women, of the Soviet Army. We pay tribute to the anti-fascist liberation movements, the guerrilla fighters throughout Europe who took the arms against the occupying forces of Nazi Germany.

We defend the historical truth against anti-communist distortions. To those who intend to re-write history, we say this: No falsifications will ever shadow the epopee of the heroic men and women of the Soviet Union.

The slanderous anti-communist campaigns by the imperialists cannot prevent social progress and the wheel of history will move forward. Our era is the era of passage from monopoly capitalism to socialism and the 21st century will bring new social revolutions.

Eternal gratitude and honor to the fighters of  the Red Army, to the people of the Soviet Union! Long live socialism-communism!