Charilaos Florakis Remembered: The story of a Greek communist leader 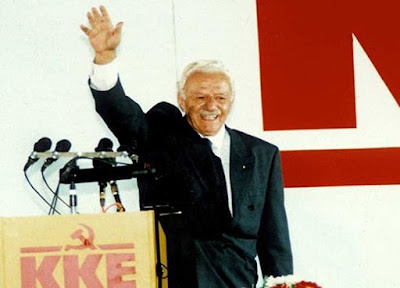 It was the 22nd of May 2005 when Charilaos Florakis, General Secretary of the CC of the Communist Party of Greece (KKE) from 1972 to 1991, passed away at the age of 91. Florakis' life and activity, identified with the history and struggles of the KKE, was devoted to the ideals of marxism-leninism.

Born in 1914 in Paliozoglopi, a small village in Thessaly, Charilaos Florakis became a member of OKNE, the Communist Party’s Youth Wing, in 1929. As an OKNE member and later as a student and active worker at the so-called “TTT” (Posts, Telegraphs, Telephone Offices) he began his political activity, during a socially and politically turbulent period for Greece.

At an early age, as a teenager, he felt the first signs of the ongoing class-struggle in the Greek countryside of 1930s:


“...the hopes that the course of the Soviets was giving towards the workers and the poor ones, were oxygen for the people who used to participate in organised mobilisations. On the same time, however, the bourgeois state, which in the beginning was looking numb and awkward, started moving towards counter-attacking and anti-communism. The police was monitoring everyone and everything and the workers' leadership was taking numerous precautions for its activity” (1).

Charilaos Florakis was quite active in the workers, labor union struggles, as a working telegrapher, member of the “TTT” struggle committee, acting under especially difficult circumstances in the midst of Ioannis Metaxas’ fascist dictatorship. Due to his union activity, he was transferred many times from town to town. Wherever he was, however, young Charilaos was trying to create contact with clandestine groups of communists.


Guerrilla fighter in EAM-ELAS and the Democratic Army of Greece

Florakis participated actively in the resistance struggle against the Nazi occupation. In June 1941 he became a member of the KKE. He was among the organizers of the first mass strike in nazi-occupied Europe, which took place in Athens in April 1942. At the same period he joins the ranks of EAM-ELAS (National Liberation Movement – Greek National Liberation Army), going underground in May 1942.

As a member of the anti-fascist liberation movement in the Second World War, Charilaos Florakis participated actively in the fights of EAM-ELAS being a guerrilla officer. From 1943 to 1945 he was promoted successively to the ranks of Captain and Major in the ELAS army. He participated in the bloody events of December 1944 against British imperialists and the Greek bourgeois administration. He was arrested in October 1945.

The struggle of the Democratic Army (DSE) against the Greek bourgeois forces and their imperialist allies was the most significant moment of class-struggle in 20th century's Greece. Charilaos Florakis has an active role in the 1946-1949 war, being a military officer of the Democratic Army, first as a Lieutenant Colonel and later from the rank of Major General in 1948. On September 1949, after the defeat of the DSE, he moved to the Soviet Union. Between 1950 and 1953 he studied at the M.V. Frunze Military Academy in Moscow, from where he graduated with honors.

Captain Yiotis - as his nom de guerre was- never submitted to “political correctness”. Well known not to mince his words and in calling a spade as a spade, he was telling journalist Christos Theocharatos years after the end of war:


“Yes, the Civil War was unavoidable. Because, the domestic and foreign reaction had decided to subjugate and exterminate every patriotic and democratic resistance. Only if we were waiting to arrest us, to torture us, to humiliate and kill us, then we wouldn't have a Civil War. But, even this, without armed resistance, extermination of us wouldn't be a unilateral civil war? […] The Civil War was a patriotic and democratic struggle, like the Resistance (in WW2) was, and not a fight for a regime. It was the continuation of the Resistance” (2).

For his political ideas and activity, as a member of the KKE and militant guerrilla of EAM-ELAS and the Democratic Army, Florakis was persecuted by the Greek bourgeois state. He faced numerous trials and was imprisoned several times. But he would always manage to find the courage and transform his defense speeches in the courts into fierce tirades against his prosecutors. In a testimony to the court in the city of Larisa, on April 1955, Florakis said:


“Communists aren't those who have no homeland. Communists are simple people, hard-working people, having ties with the land they were born in. […] Those who don't believe in homelands and who have no country are the plutocrats. The wealth gives them the ability to live in any place and every country they want. The Occupation proved, as well as the present situation does, who has a homeland, who loves her and who sacrifices himself for her freedom and prosperity” (3).

The accusations against him, the persecutions, the threats against his life could never uproot from his mind his strong belief in communist ideals, in the Communist Party, in the great values for which he fought. Addressing his prosecutors, at the end of a trial, he said:


“Personally - as I told you in the beginning - I am filled by the great ideals of communism. There is no power in the world that can oblige me to denounce them. For the realization of the Party's policy, for the service of our People's interests, for Greece, I gladly offer all my powers and, without doubt, even the most valuable possession for a human being - my own life...”.

Charilaos Florakis served a total of 18 years in the prisons of Greece's post-Civil War bourgeois state. He was imprisoned at the age of 40, he was released under conditions at 52 and then he was re-arrested and sent into exile at 53. He remained imprisoned for 216 months and 6,570 days. In 1972, in the midst of the struggle against Colonels’ dictatorship in Greece, he was elected First Secretary of the - then banned - Communist Party and later General Secretary of the Central Committee.

He served as the General Secretary of KKE from 1972 until 1991, fighting with all his power for a Communist Party dedicated to the ideals of marxism-leninism, against any opportunist or revisionist deviation.


A staunch opponent of revisionism
Florakis’ role and stance against opportunism was particularly significant during the counterrevolutionary overthrows of 1989-1991 in the Soviet Union and Eastern Europe. Aleka Papariga, who succeeded him as General Secretary of the KKE, described his role:


“Lively, in front of us, is the decisive contribution of Charilaos Florakis, in 1990, in the wide plenary of the Central Committee, in the 13th Congress in 1991. In defense of the socialist system. His courageously stance to defy the mountains of lies against socialism and socialist ideology. He had- especially in the then extremely difficult and dark times- the solid belief that the world will change, that socialism will win. It isn't always easy to go 'against the flow'. It isn't always easy to remain firm when others are falling. And, even more, to pave new ways” (4).

Charilaos Florakis remained a consistent supporter of the important achievements of the 20th century socialist construction. When eurocommunists and revisionists were saluting the counterrevolutionary events in the Soviet Union in the beginning of the 1990s, Florakis remained a staunch defender of the ideological heritage of Marx, Engels and Lenin. He knew that the counterrevolution was a negative setback for the international communist movement, but he was also deeply assured that it wasn’t the “end of history”.

Charilaos Florakis never accepted the theory of the so-called “end of history” that prominent bourgeois analysts and theoreticians, like Francis Fukuyama, were promoting back then. More specifically, Florakis was saying:


“Despite it's metaphysical content [the “end of ideologies” argument] can't change reality. And the reality states that now, with the Soviet Union being dissolved, the capitalism’s existing contradictions haven’t been weakened, but getting stronger […] Neither capitalism is eternal, nor the end of communism has come, for the simple reason that the people will not renounce the vision for a just society and won't abandon the struggles for socialism” (6).

Charilaos Florakis died on May 22, 2005 at the age of 91 in Athens. His funeral was attended by thousands of people, members and supporters of the KKE, communists and non-communists, young and old working men and women. According to his own wish, he was entombed at Agios Ilias, a quiet mountainous place surrounded by forrest, close to his birthplace, Paliozoglopi.

Florakis was one of the 20th century’s most significant figures in the Greek and European communist movement. A fighter, a leader, an extraordinary personality but, most of all, an unwavering communist who remained loyal to his ideas until the end.

In a speech in 1989, at the age of 75, Charilaos was saying: “If, like Faust, I had to restart by life, what would I do? I would become a communist once again and I would fight for a better world and, again, I would struggle - with less or more mistakes, doesn't matter - for the homeland, for democracy, for social justice, for Socialism”.